By Paul Barrett and Maretha Prinsloo on March 5, 2020

HR practitioners tend to expect a high degree of correspondence between the organization’s actual, assigned level of work of an employee and the individual’s current and potential levels of work as indicated by the Cognitive Process Profile (CPP).

This may, however, not necessarily be the case. The presence and magnitude of the mismatch between the actual and CPP predicted levels of work either suggests measurement error or may be due to factors external to the assessment itself. This blog focuses on external reasons for possible discrepancies between the person’s actual level of work complexity versus their cognitive competence.

Reasonable speculations regarding person-job mismatching may include that of: poor talent management decisions; placement based on networking connections; perceptions of individuals based on their reputations; nepotistic practices; affirmative action legislation such as quota systems; unequal educational opportunity and qualification; gender- and age-related factors; and/or normative cultural practices within an organisation or country, all of which may affect and skew the expected relationship between the level of work at which a person has been appointed, and their cognitive capability.

Given a substantive database of relevant biodata from individuals who have completed a CPP (over a quarter of a million cases), we are in a unique position to evaluate the prevalence of inappropriate level of work placement in the corporate environment, as well as speculate about its potential impact on workplace productivity and the strategic viability of organisations.

Our database includes a variable indexing the level of education for an individual, their current position (organized into meaningful job-roles/levels of seniority), and the functional area in which an individual is currently working.

In this blog article we report on the extent to which the level of education of an individual determines their current job-role or position, and the functional area they work within. The attained educational level is assumed to be a proxy for knowledge and intellectual skill and can therefore be expected to be associated with the job-role/job-level a person attains in life. If reasons other than education, qualification, and skills are resulting in people attaining job-roles/positions they would otherwise not attain, then we might be able to detect such anomalies using an appropriate visualisation methodology. Such evidence would help explain the occasional mismatch between the actual and CPP predicted levels of work.

Given we are working with class-category data and frequencies, it is helpful to visualize the data as the ‘flow-lines’, in an alluvial plot, which enables the visualisation of structural changes between categories (here frequencies of cases). The ‘flows’ between categories represent the frequencies of cases at a particular education level, where those cases distribute themselves within the current position categories, and in turn, where they distribute themselves in a functional work area. The width of the path between the three blocks of attributes (highest level of education, current position, and functional area) represents a higher frequency of cases in that pathway.

Figures 1 and 2 show the trends within the data.

Figure 1: The frequencies of cases at a level of education, their current positions, and in which functional area they now work 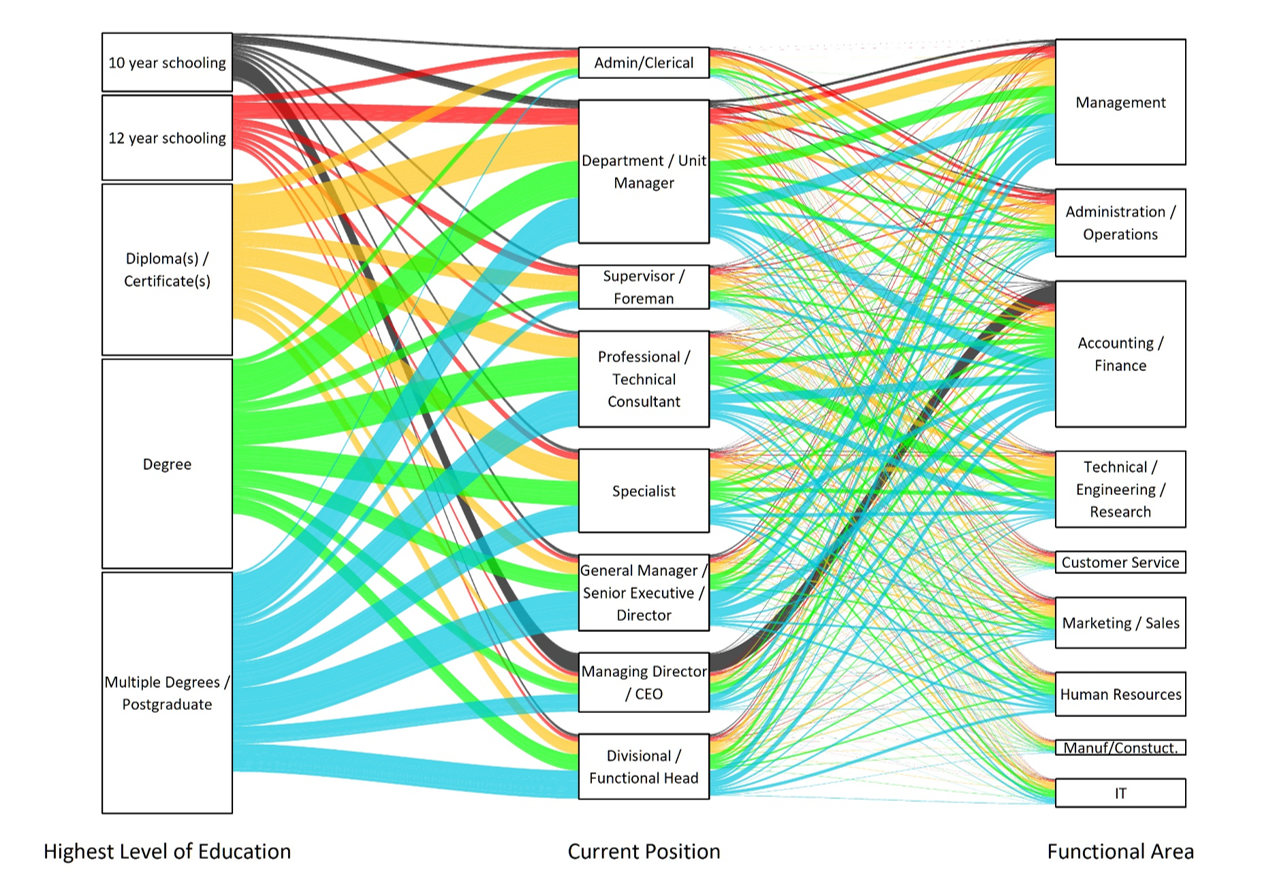 Figure 2: The frequencies of cases at a level of education, their current positions, and a subset of functional areas in which they now work 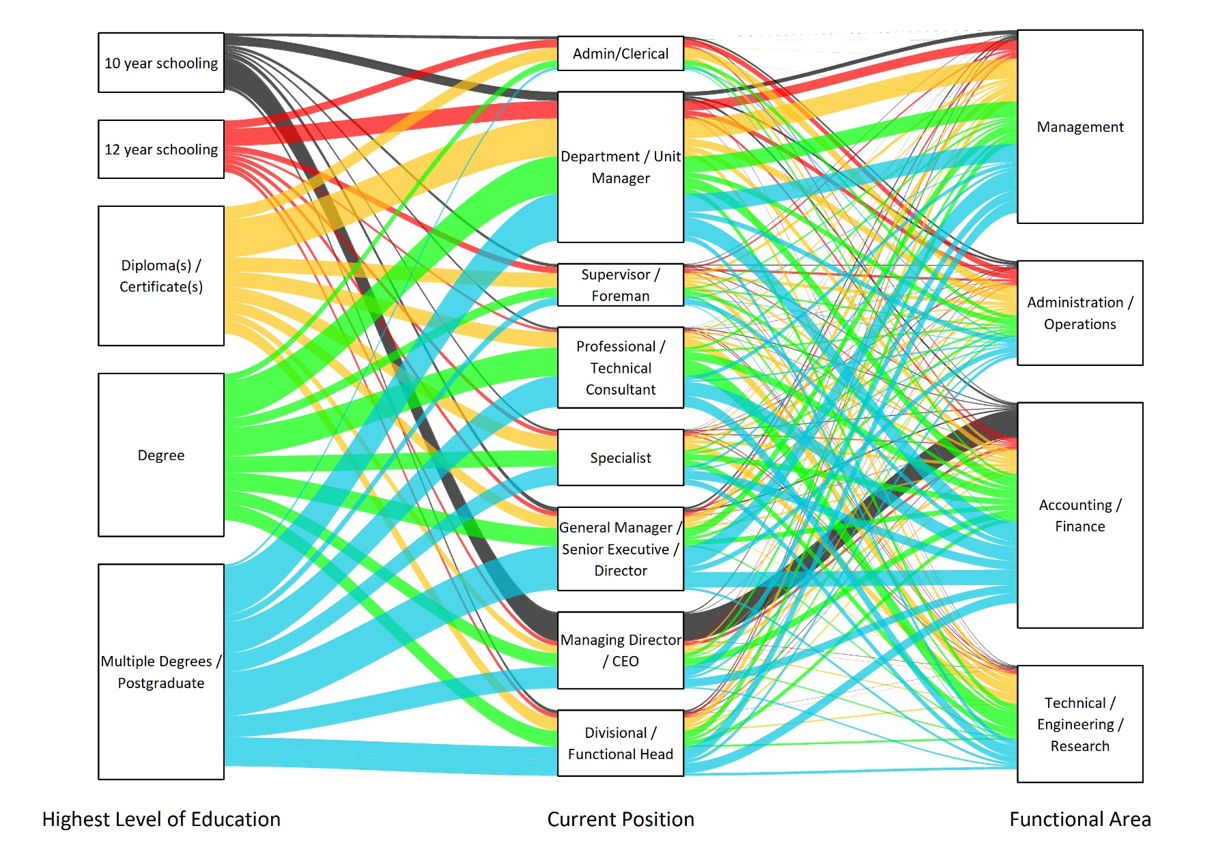 What we see from the above figures is that those who left school with no diplomas, certificates, or degrees seem to be represented at all job-levels and specialities (current position), but even more surprisingly, the bulk of them attain a leadership position of Managing Director or CEO in an Accounting/Finance functional area. A position one might expect requires professional qualifications as well as experience.

While educational level is not necessarily a direct causal variable for attaining such elevated positions in the work environment, the higher frequency pathway does suggest something ‘unusual’ is at work here, given the fewer numbers in that category for people with degrees. On the surface, it looks like some test-takers have been appointed to job-roles/positions for which they are academically/professionally unqualified.

This result would also explain why in some instances, the cognitive/performance-based CPP level of work indicator is at odds with the actual level of work of a test-taker. The logic here is that the CPP is a complex assessment of cognitive/thinking skills and styles; with academic study and qualifications being a proxy for the cognitive complexity required to undertake and successfully sustain such study.

We would expect people (on average) to be at a disadvantage when it comes to attaining job roles which require specific knowledge and skills, or senior roles where good judgement, the capability to think clearly on a range of topics, and strategic thinking is definitive of the role (as in Managing Directors and CEOs). Yet the data does not reveal such a clear picture.

Does any of this matter?

Well, yes. Because if individuals are being appointed to specialist, senior management and/or leadership job roles on the basis of attributes which take precedence over their demonstrated expertise and intellectual performance, then over time the consequences might prove to be disastrous for any organization, depending upon the ‘protective’ qualities of individuals surrounding the misplaced individual.

The practical impact of failing to match people capabilities and job requirements are also suggested by the findings of this study where the majority of candidates with lower educational levels; namely, 10- and 12-year schooling, certificates and diplomas, were resident in and assessed in South Africa. Given that many of these candidates are employed in management and executive roles in the public sector and/or state-owned entities (SOEs), the disintegration of the services within these sectors over the past two decades may not be purely coincidental and seems to have contributed to adverse implications at a national level.