By Paul Barrett and Maretha Prinsloo on August 7, 2018

In this investigation, we look at how the scores on the 14 Information Processing Competencies (IPCs), which are graphically represented in the CPP reports, vary over various current employment categories, as a function of age at CPP completion, and highest attained educational level.

The dataset we used was a sample of the most recently acquired 60,572 cases of CPP data where a subset of cases provided a current employment position which we subsequently coded into 9 categories (for example: Professional/Technical Consultant, Managing Director/CEO, Supervisor/Foreman). Some categories are not entirely discrete and are broad in terms of the industry sectors represented by cases within a category. However, for the purposes of analysis they might still be considered ‘informative’.

Three levels of education were created from five fixed-response categories:

We initially created 27 graphs, three for each current employment category (one for each educational level), displaying LOWESS smoothed trend lines for all 14 IPCs. An example of one of these graphs is shown below: 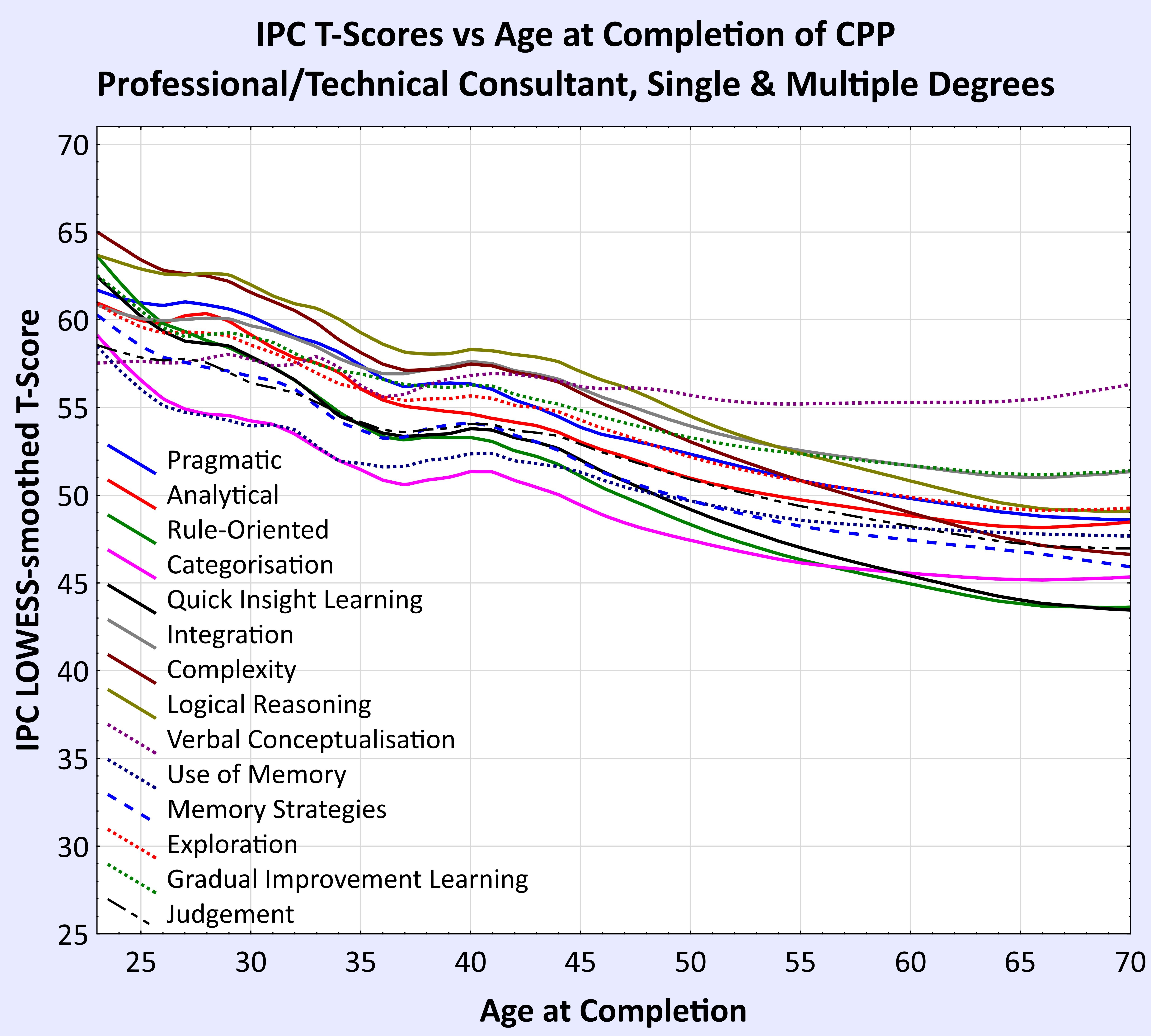 The graph is displaying the IPC score-trends as a function of age, for the single and multiple-degree group for Professional and Technical Consultants.

By comparing the trends in the three graphs, one for each educational level for a single current employment position, several patterns can be seen (which are detailed in our Technical Report #12 available from our Technical Report Series web-page). Of interest to us here is what looks to be a ‘protective’ effect of education on certain IPCs for certain kinds of employment position.

In order to show more clearly the specific trends, a subset graph was constructed showing the LOWESS trends for all three educational-level groups, for a specific IPC and employee group. Five clear examples of these are shown below: 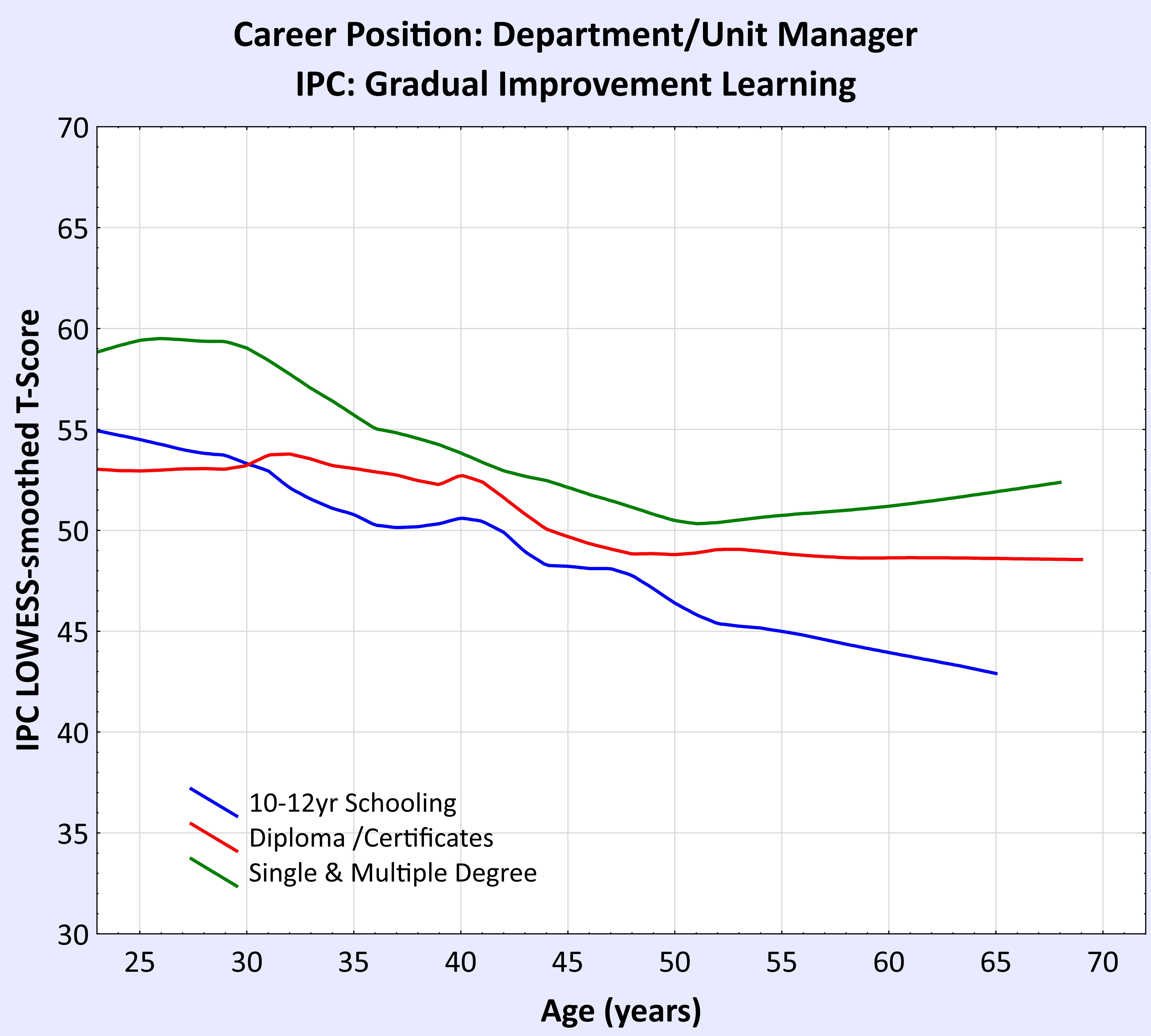 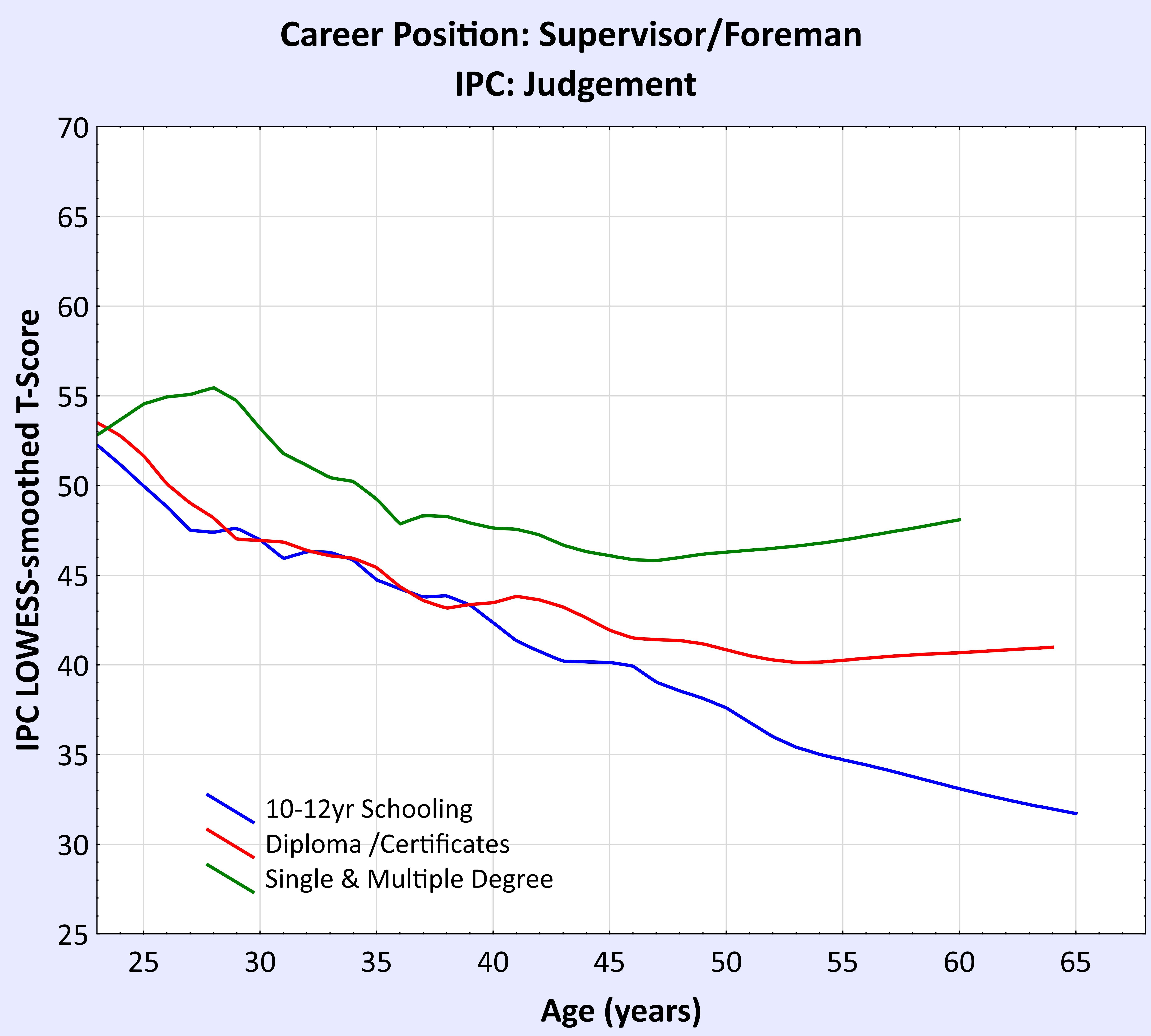 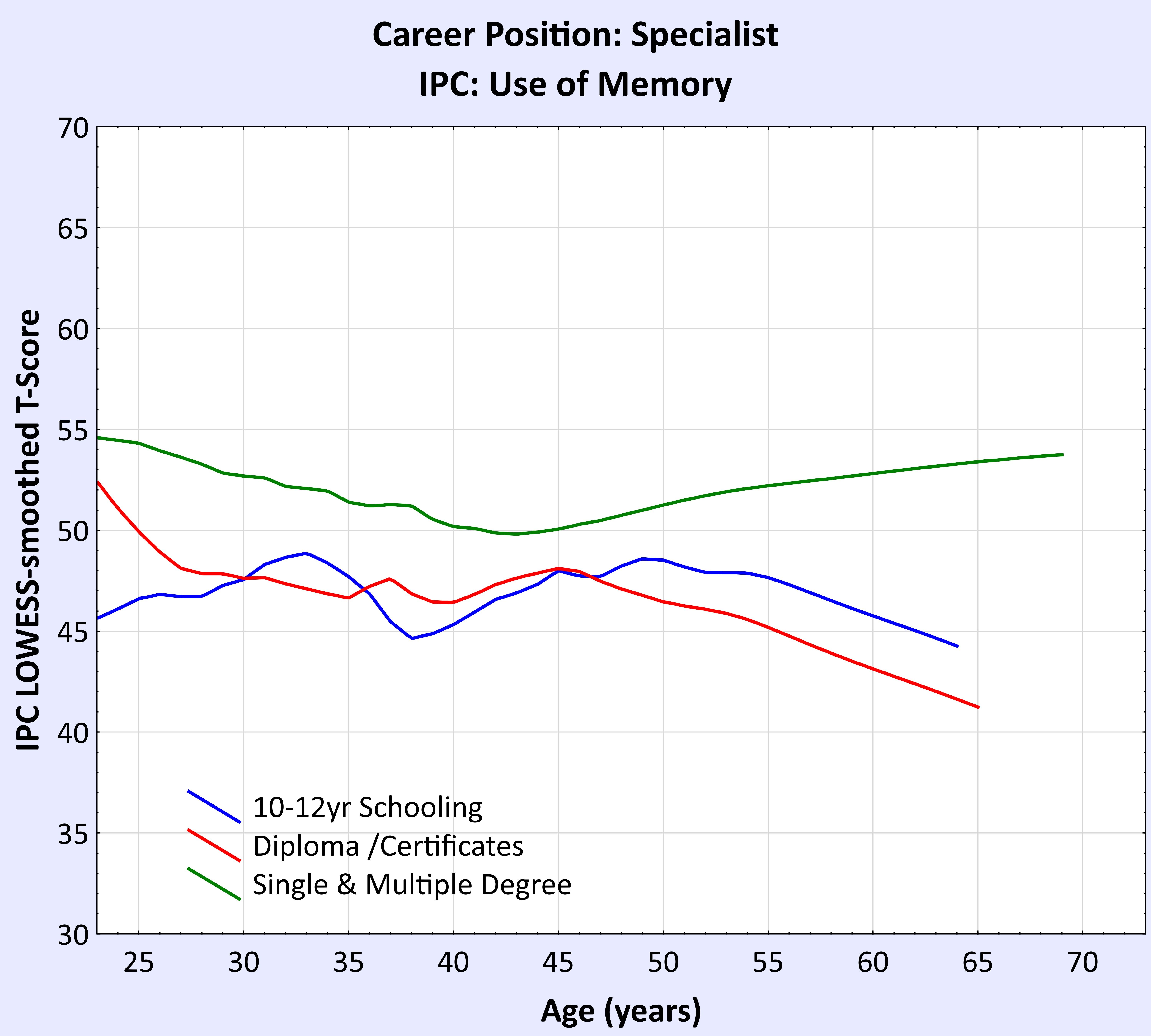 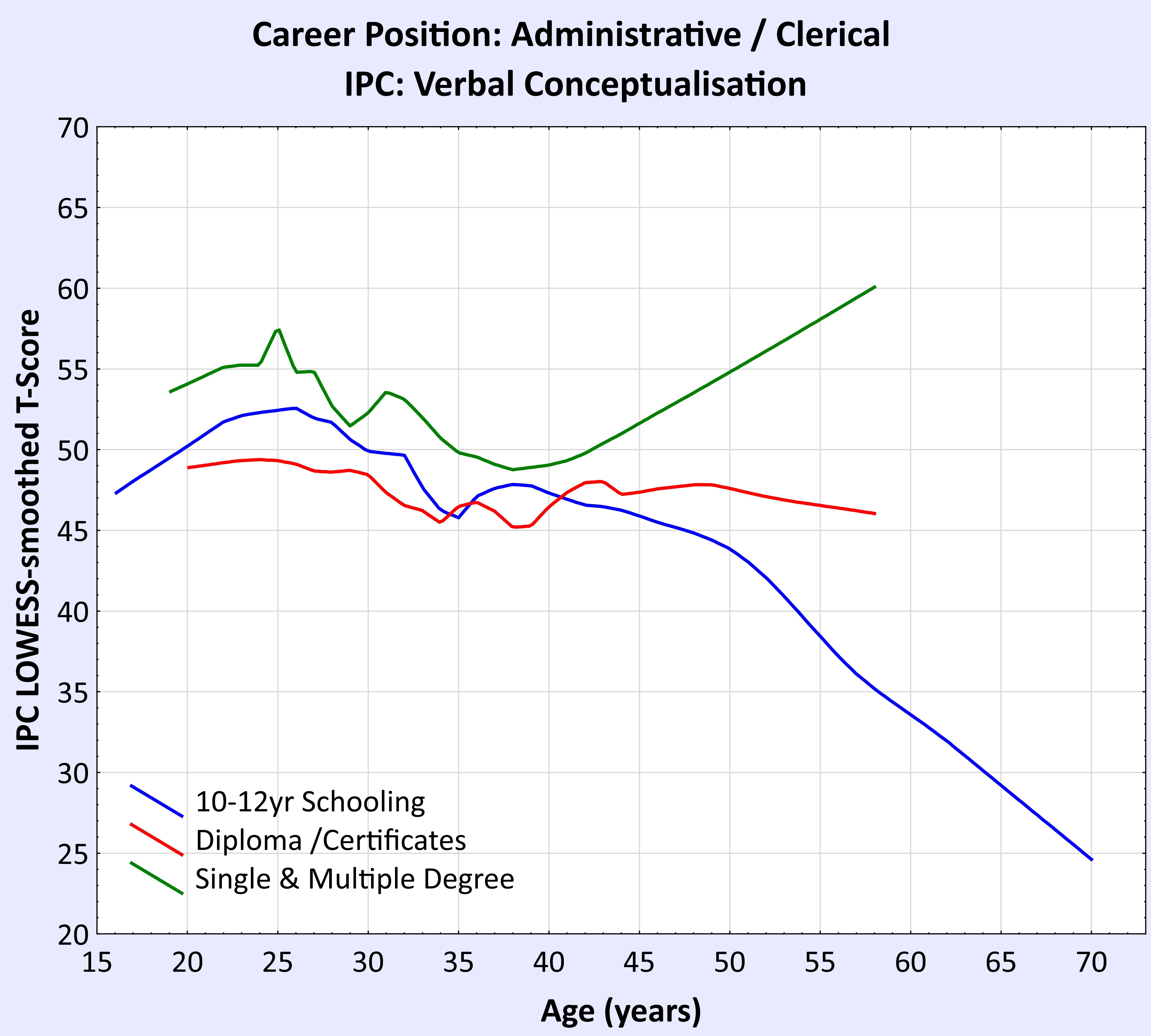 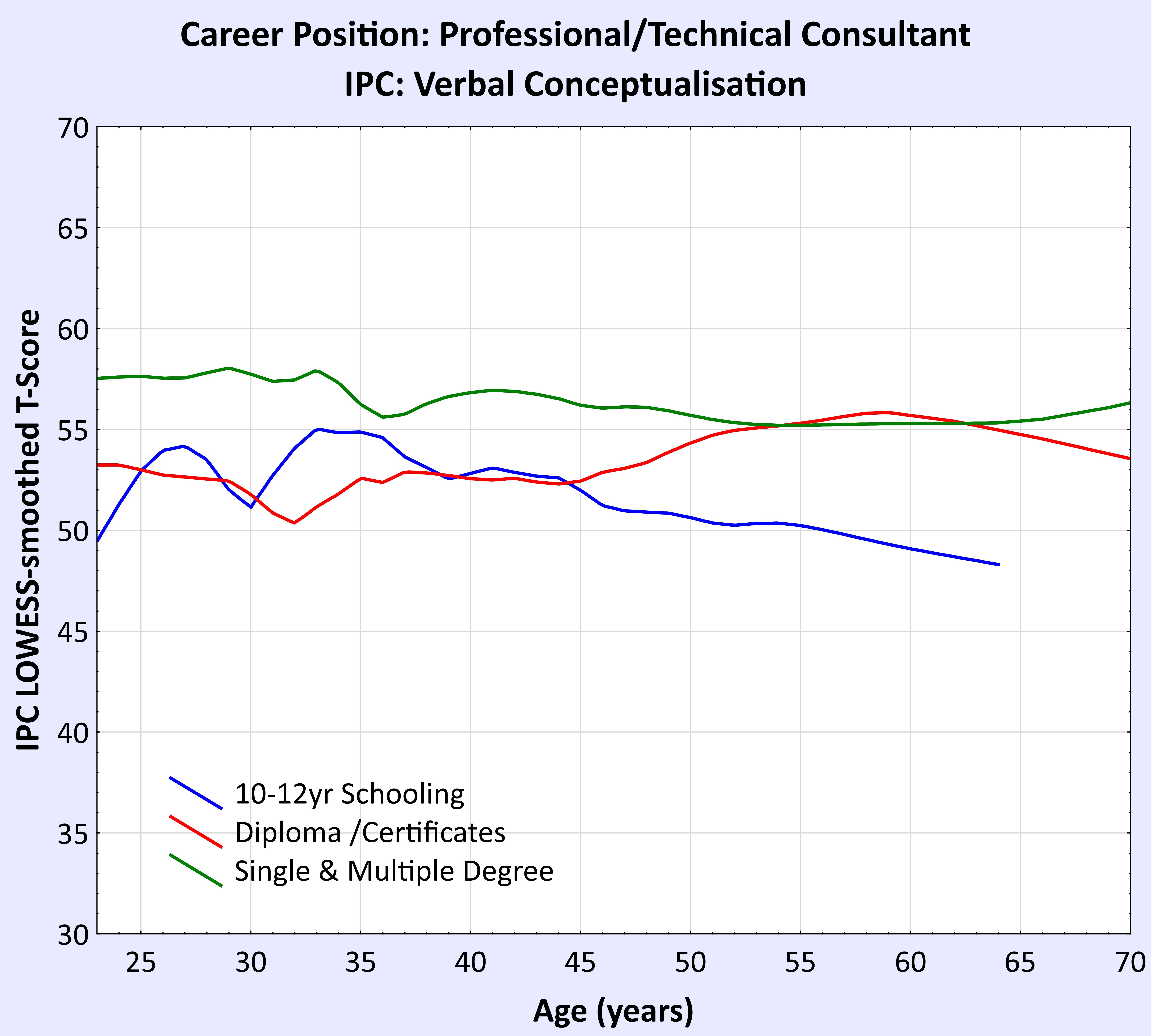 In all examples, we see a clear trend for the single and multiple-degree group to show less attenuation of the information processing competency as a function of age. Certainly examples 1, 2, and 4 show a clear monotonic trend for what might be referred to as a ‘protective of competency level’ effect of education.

This finding may, however, also indicate that graduates show higher levels of intellectual functioning to begin with and may migrate towards careers where intellectual skill is required and constantly practiced.

The decline in the average IPC scores of those in Operational roles (admin, clerical, trainee, supervisory…) with increasing age, may also be an indication that individuals with higher levels of cognitive capability, over time obtain further educational qualifications or get promoted to more complex job environments.