Home » Blog » The impact of age, education and operational work on cognitive functioning

The impact of age, education and operational work on cognitive functioning

By Christoff Prinsloo and Maretha Prinsloo on August 28, 2018

In this investigation, we look at how the scores on the 14 Information processing competencies (IPCs) which are graphically represented in the CPP reports vary within an Administrative/Clerical employment group as a function of:

The dataset we used was a sample of the most recently acquired 60,572 cases of CPP data. Two graphs were created, displaying LOWESS smoothed trend lines for all 14 IPCs, one for each educational group. 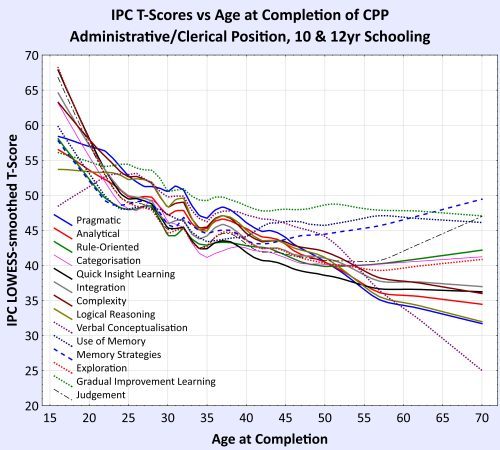 For those with only a secondary school qualification (10–12 years schooling):

The rapid age-related decline in the average IPCs of the 10 – 12 year schooling group in operational roles, thus probably indicate that those with higher level processing skills tend to:

It may also indicate that operation roles fail to further contribute to the development of cognitive processing skills over time. 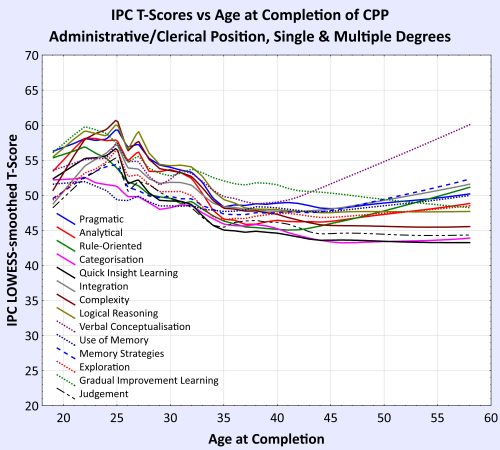 For those with a tertiary educational qualification (degree or multiple degrees):

The age-related decline in the average IPCs of the graduates in operational roles after the age of 30, probably indicate that:

Within the first 10 years there is thus a significant improvement of the processing skills of this group, followed by a gradual decline.

Cognadev Technical Report #12 provides the detailed sample information and descriptive statistics from which this blog article has been compiled.