In the second of this three-blog series we look specifically at the values and world views of the executives (as described in the first blog), as measured by the Value Orientations (VO) assessment. In these graphs, we use the available data from all countries/regions.

The worldviews and valuing systems of the executives were analysed, using the Value Orientations (VO) assessment as based on Spiral Dynamics (SD) theory as well as other developmental models in Psychology, Consciousness Theory, and various Spiritual traditions. 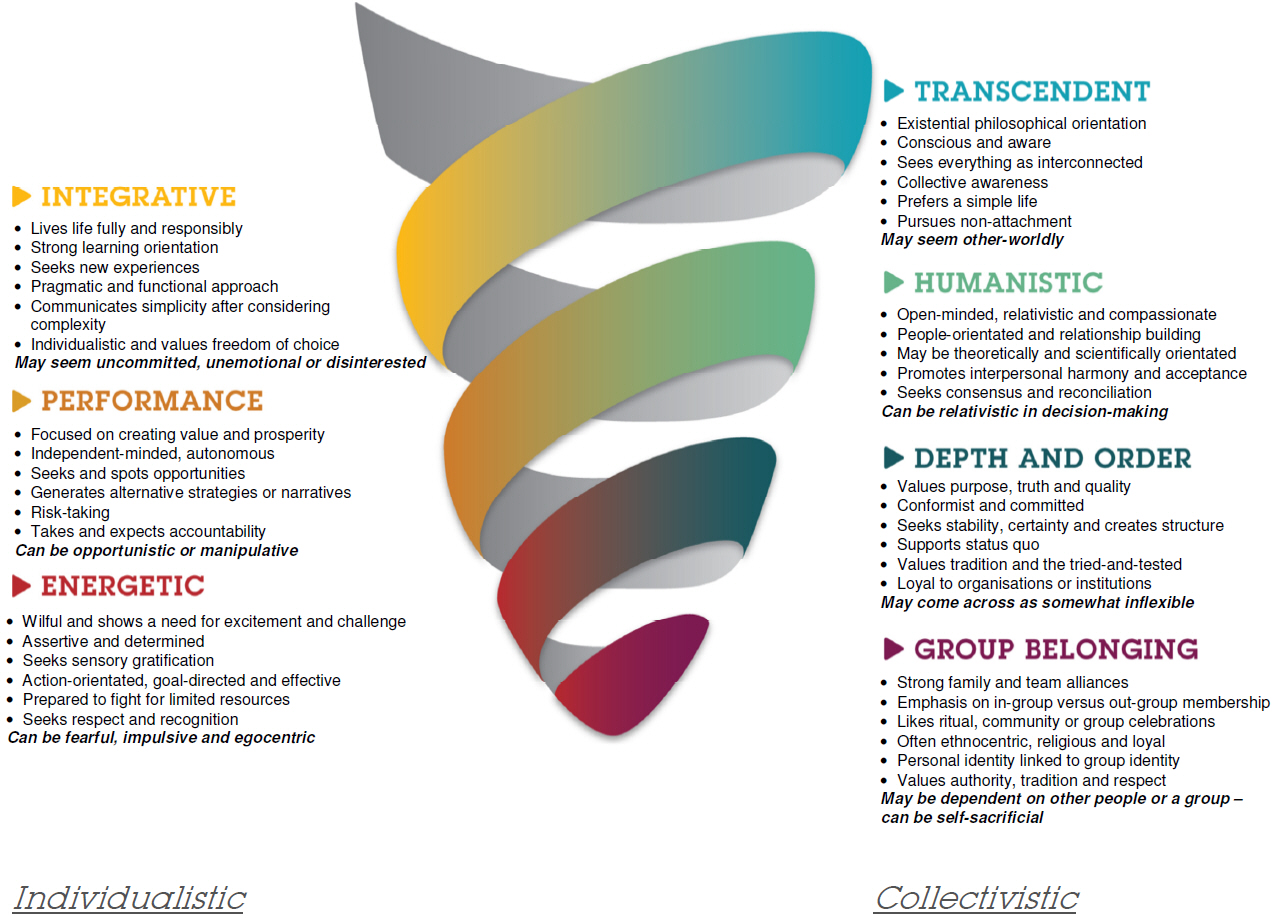 Looking at the values accepted by executives across the four regions: 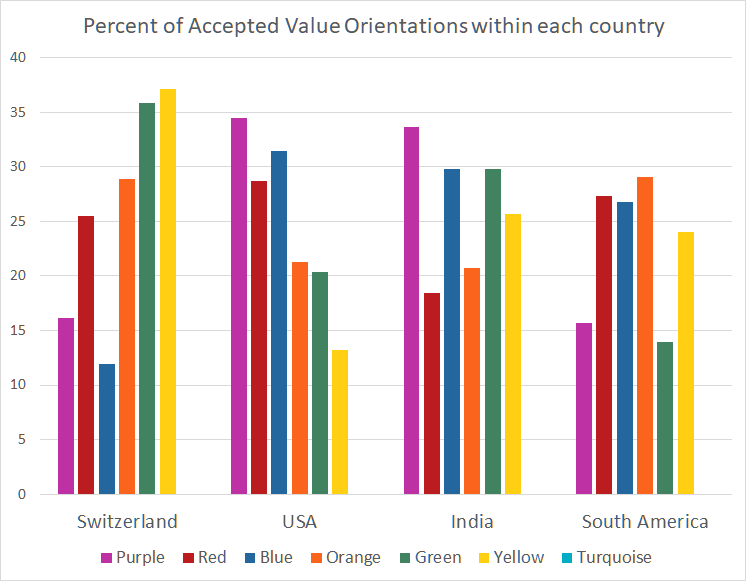 Interesting findings emerged from the analysis of the Worldviews and Perceptual frameworks of the executives, as measured by the VO. Again, regional differences prevailed. 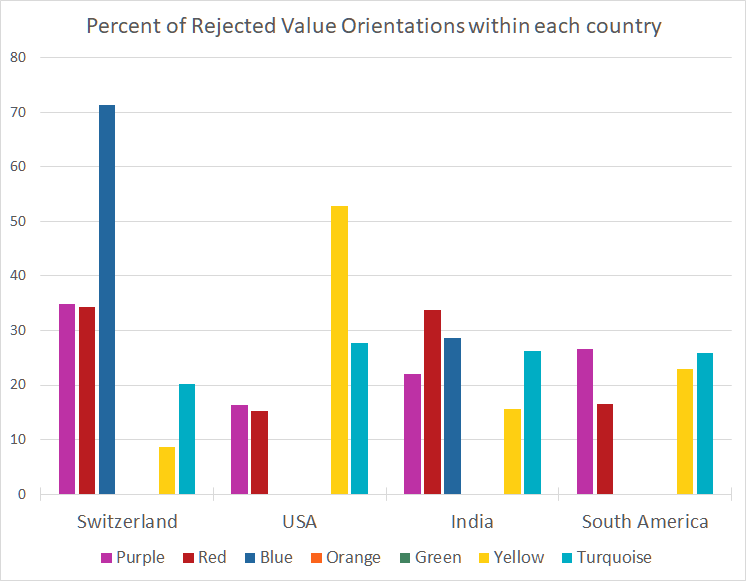 In terms of the Rejection of certain value orientations, almost all groups refrained from rejecting Orange (strategic, value adding orientations) and Green (people orientation, tact and diplomacy, intellectual approach) values. It also seems that the sample group from Europe / Switzerland experienced particular discomfort in dealing with others driven by a Blue value orientation, and which may be somewhat inflexible and authoritarian, whereas the sample group from the USA rejected an open-minded, holistic, systems approach as was most common amongst the executives from Europe / Switzerland. Unless there is adequate understanding of these value orientations amongst executives themselves, such differences in approach could potentially derail the implementation of organisational strategies.

Here, we plot the relative percentages of executives from Switzerland and the USA who accept each value orientation, where the executives are rated “Meets” performance expectations and “Exceeds” performance expectations. As in part 1 of this blog series, because India and South American performance ratings are so very different from these other countries’ ratings, we had to exclude their data from these analyses. For each rating, the frequency of a specific accepted orientation is expressed as a percentage of all orientations accepted for that rating. 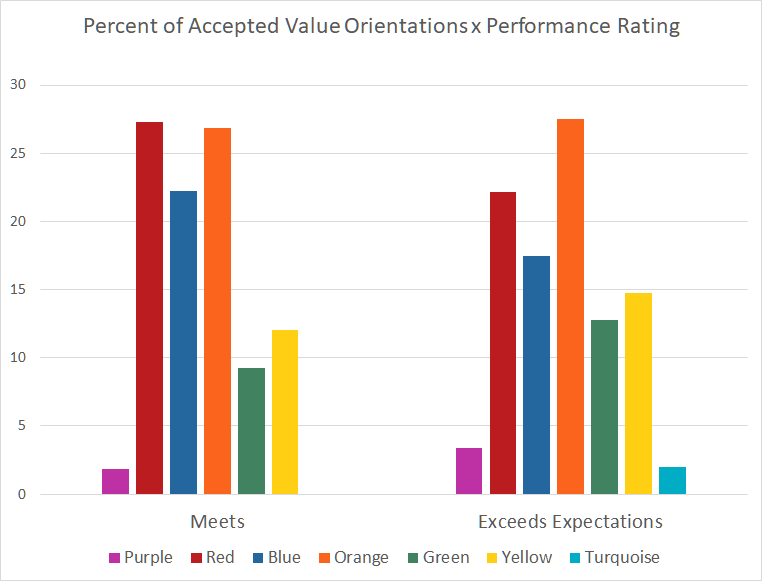 Primarily Red, Blue, and Orange accepted orientations are seen in executives rated as Meeting or Exceeding performance expectations, with the Exceed group (as compared to the Meet group) showing less preference for Blue and Red, with an increasing preference for Green and Yellow orientations – thereby a somewhat more sophisticated and integrative approach.

A Red orientation indicates highly energetic, practically inclined as well as competitive, power driven and egocentric approach, while Orange involves a resilient approach characterised by continually looking for new opportunities or strategic angles to create value. The Blue orientation is often associated with acceptance of authority and the status quo – a stable and compliant approach.

The increasing preference for Green and Yellow orientations in the “Exceeds Expectations” group is indicative of a mindset that increasingly values humanitarian, theoretical and environmental matters (Green) as well as a greater focus on the issues associated with integrated systems (Yellow). Notably the Blue orientation decreases in this group, perhaps indicating a slight lessening in acceptance of the status-quo and mere compliance. 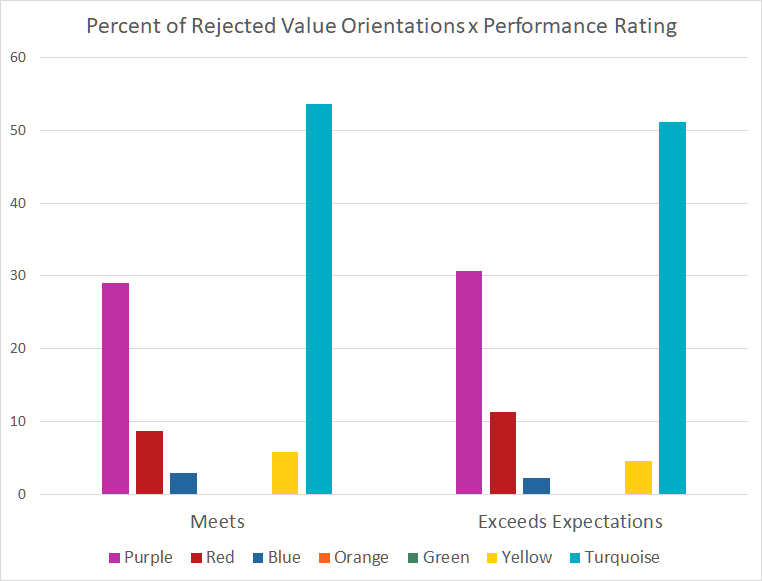 Here we see that both Performance rated groups strongly reject both Purple and Turquoise orientations, while both groups entirely refrained from rejecting Orange (strategic, value adding orientations) and Green (people orientation, theoretical, intellectual approach) values. The Purple and Turquoise values represent very different levels of awareness, but are both characterised by an appreciation of spiritual, seemingly “other worldly” and/or metaphysical perspectives.

As before, for each rating, the frequency of a specific accepted orientation is expressed as a percentage of all orientations accepted for that rating. 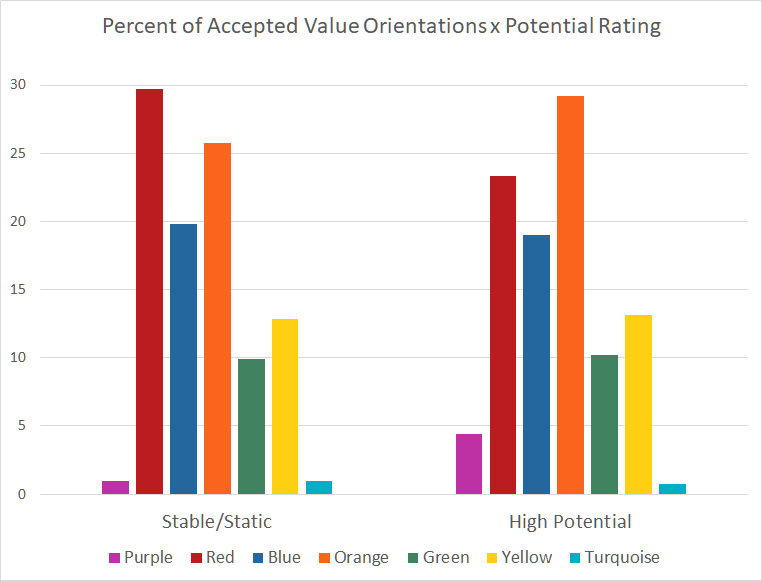 Primarily Red and Orange accepted orientations are observed among executives whose potential is rated as Stable or who are showing High Potential. A Red orientation indicates highly energetic, practically inclined as well as competitive, power driven and egocentric approach, while Orange involves continually looking for new opportunities or strategic angles to create value. The preference-order for Red and Orange orientations changes between the Stable and High Potential group, with the latter showing a higher value placed on strategic thinking/initiatives over and above the more energetic, competitive, ‘now’ mindset associated with the Red orientation. Similar findings also emerged from comparable studies. 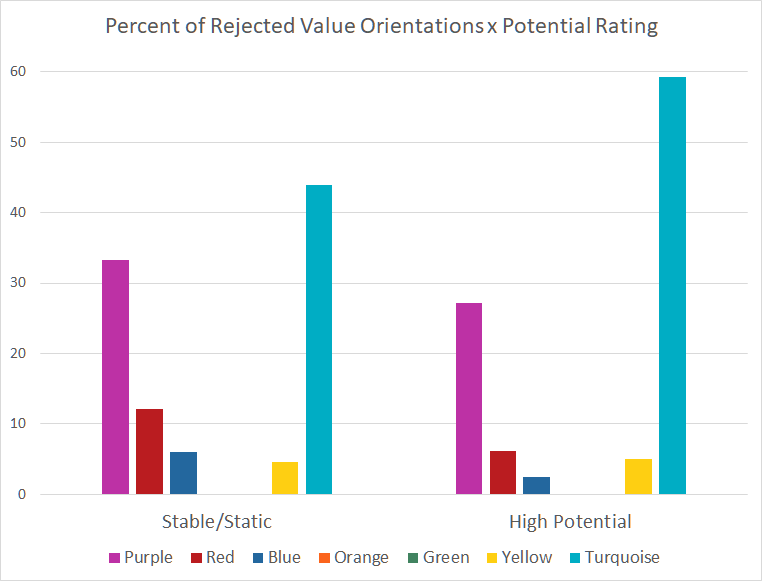 The distinct differences in the value orientations of various regional groups could cause discomfort and derail strategy within the organisation. This finding was, however, mitigated by the additional finding that none of the executives opposed Orange (strategic, commercially oriented, value creation, win-win type initiatives) and none rejected the somewhat sophisticated Green orientation (people oriented, ideas oriented and theoretical). In terms of value orientations this global team of executives could therefore find common ground by capitalising on typically Orange (commercial) and Green (triple bottom line) strategic initiatives.