By Paul Barrett and Maretha Prinsloo on October 29, 2019

As part of the ongoing validation of our assessments, we often come across findings which might be of interest to others. The three blog articles in this series show the relevance of three Cognadev assessments to understanding and helping develop executive performance. In this first blog, we look specifically at the intellectual functioning of executives as based on Cognitive Process Profile (CPP) results. The second blog in this series deals with the values and world views of executives as based on the Value Orientations (VO) assessment, and the third blog focuses on the motivational drivers of high-performance executives as indicated by the Motivational Profile (MP).

A large international building/infrastructure/materials manufacturer provided ‘outcome’ ratings on 218 executive employees in leadership roles. Almost all the executives have long corporate histories of around 15 to 20 years, the majority of whom have also been involved in the manufacturing/production industry for many years. Almost all have post-graduate or multiple degrees – especially in science and/or business, and the majority are males between the ages of 40 and 60.

The employees were working/rated in four geographical regions:

1. The frequencies of rating categories assigned, and the relationship between Performance and Potential Ratings within each region.

In the two graphs below, the percentages are calculated as the number of cases at a rating option for a particular region divided by the total number of ratings assigned across all regions for that rating option. 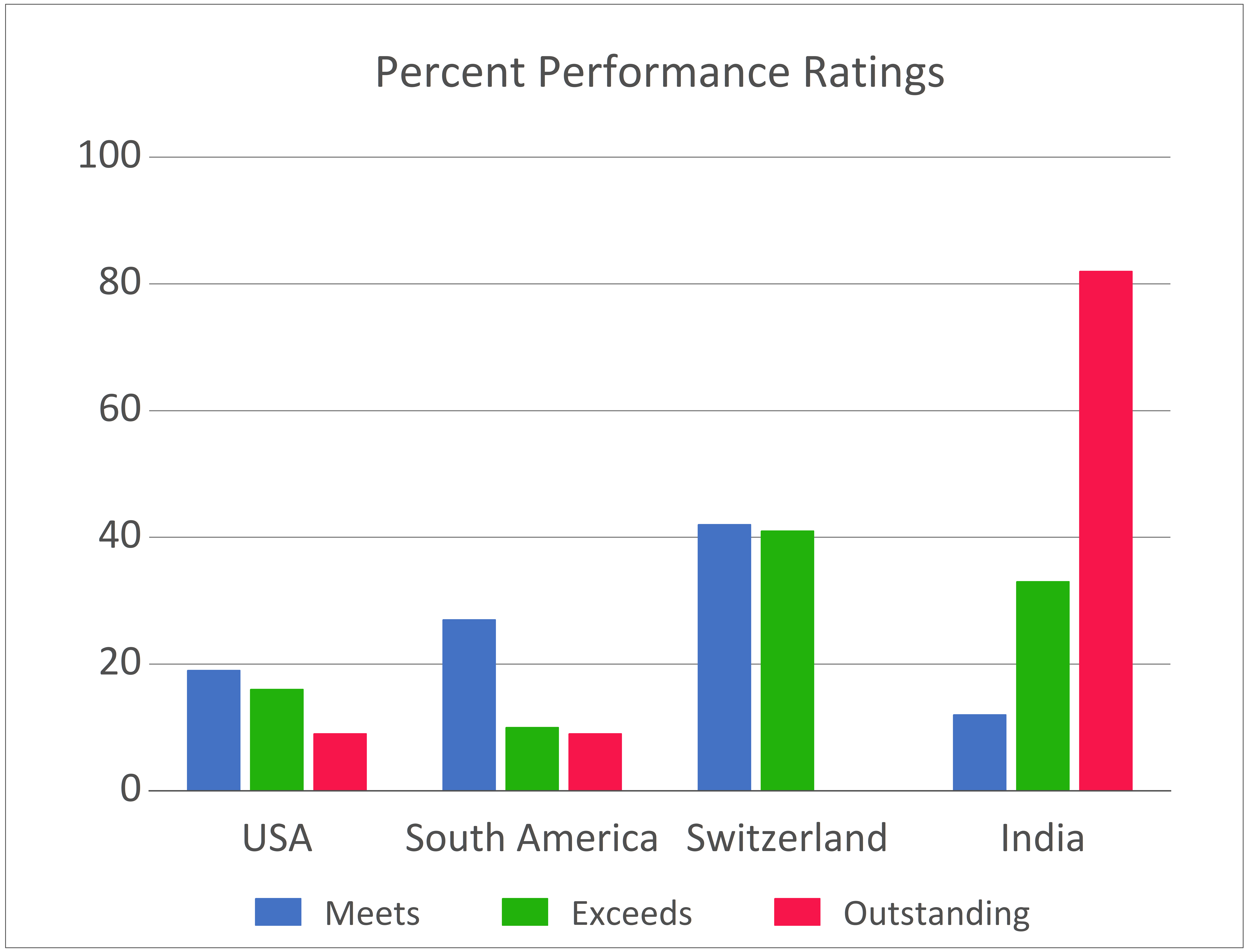 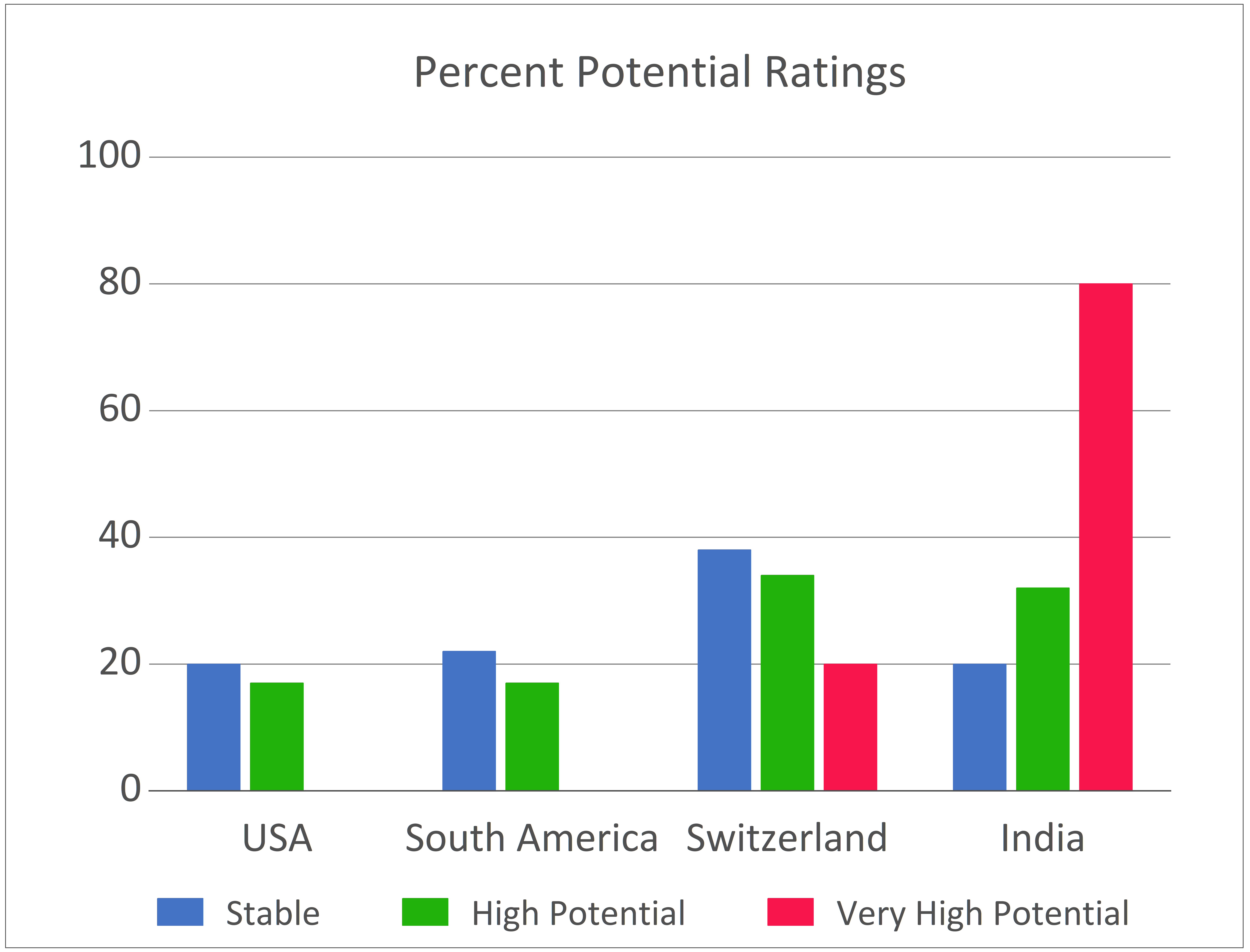 Exploring the comparability of these ratings across regions a little further, we calculated the Gamma ordered-class correlation between the performance and potential ratings within each region, looking for evidence of at least a similar relationship between the two sets of ratings. 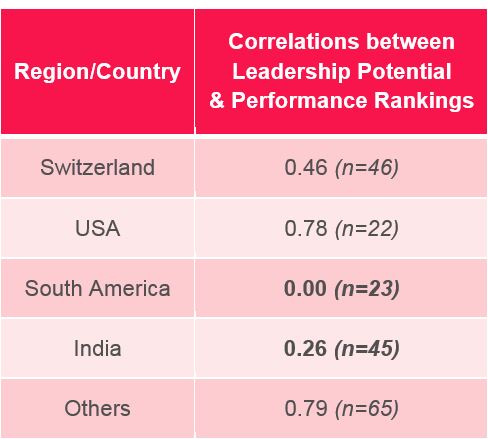 The Indian and South American ratings are clearly discrepant from the remaining regions in terms of relationship to one another.

Therefore, for the CPP analyses below, only data from regions other than India and South America will be used.

For the Performance ratings, only a single case possessed a “Below Expectations Ranking” and a single case an “Outstanding Performance” rating in the total dataset sample size of 82 cases, therefore, analyses were confined to “Meets” and “Exceeds Expectations” ratings.

It should be kept in mind that the organisation in question shows a distinct performance-based culture characterised by periodic performance appraisals by various evaluators. It is therefore unlikely that underperforming employees will end up in executive roles.

As summarised in the model below, in the World of Work two domains can be identified, the Operational and Strategic. The model is holonic in that subsequent levels or systems incorporate and transcend preceding levels or systems in terms of the complexity involved. The nature of work may entail any of five overall Work Environments. Towards the right the environments become increasingly strategic, complex, chaotic, uncertain and vague. Strategic contexts require the capacity to look more at possibilities than practicalities and suspend a focus on detail to become more aware of the dynamics of the situation. This increasing complexity requires a long-term orientation, integrative thinking and intuitive judgement when making decisions.

The CPP identifies a work environment best suited to the way in which an individual currently applies their judgement (where they are currently comfortable and effective in applying their cognitive capability) as well as the environment where the individual shows the potential to effectively apply their judgement. A person’s cognitive functioning is enabled or constrained by certain values as well as cognitive, emotional or meta-awareness factors.

The competency and the complexity requirements of the executive roles within the organisation in question, were analysed using the Contextualised Competency Mapping (CCM) job analysis tool of Cognadev. According to the job experts involved in the evaluation, the majority of the executive roles reflected Parallel Processing (SST level 4) requirements.

Next, the current and potential levels of cognitive functioning of the executives were measured using the CPP. The results are visualized in the two graphs below. The percentages are calculated as the number of cases at a CPP Level of Work classification for a fixed performance rating option (e.g. “Meets”) divided by the total number of cases assigned that rating option. 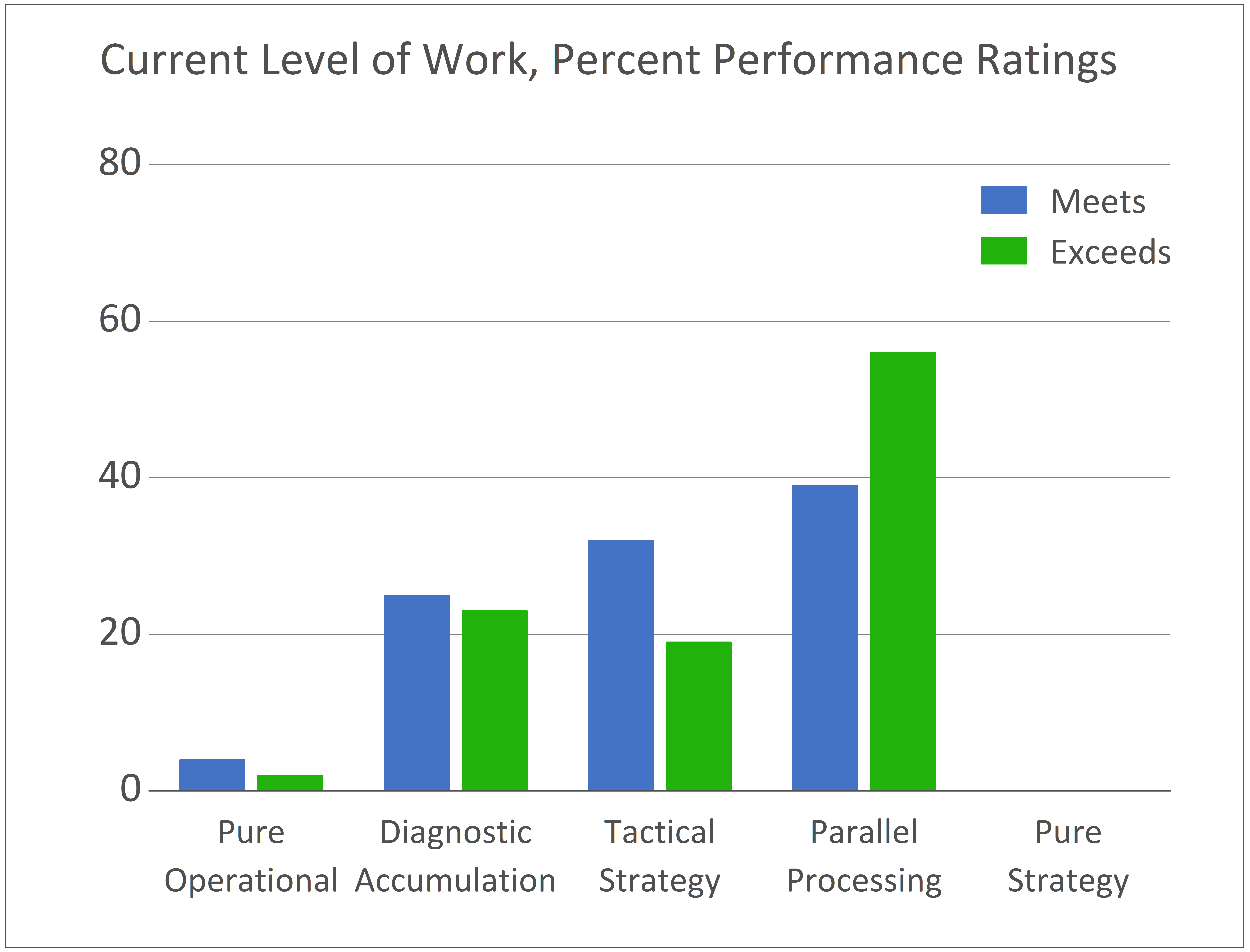 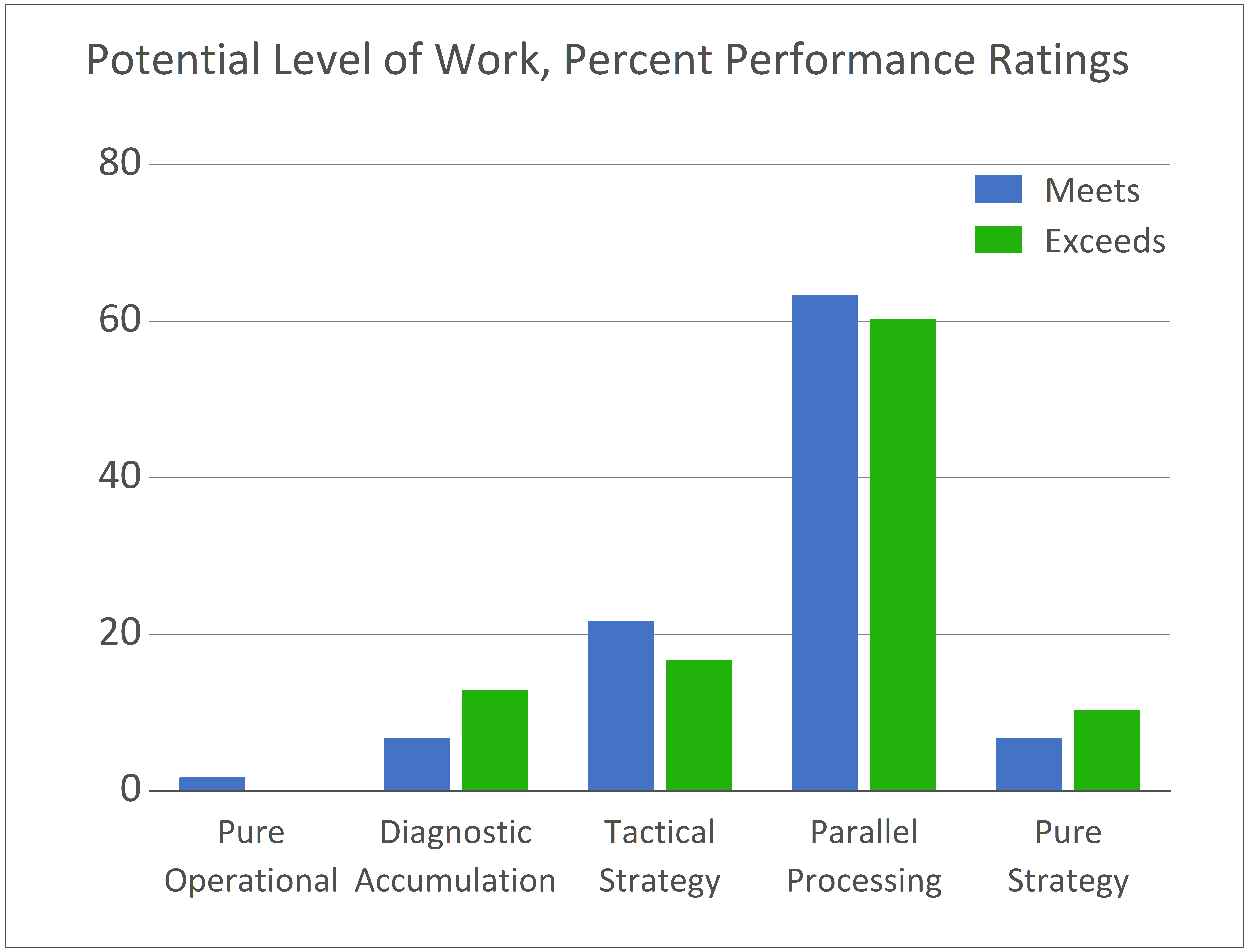 There is a clear monotonic relationship between the percentage of cases and increasing CPP Current Level as well as CPP Potential level of work rankings, except for the Pure Strategic level. As indicated, executive performance as measured for the purposes of this study primarily involved Parallel Processing work requirements instead of Pure Strategic work requirements. It should be pointed out that very few individuals show the cognitive preferences and capabilities to apply a Pure Strategic information processing approach.

The CPP Cognitive styles of the executive groups were also analysed. As mentioned, the group comprised of professionals, mostly with multiple degree in Science and/or Business. Only those who were rated as meeting or exceeding expectations of job performance were included in the analysis. Preferred cognitive style rankings varied between 14 (most preferred) to 1 (Least preferred). 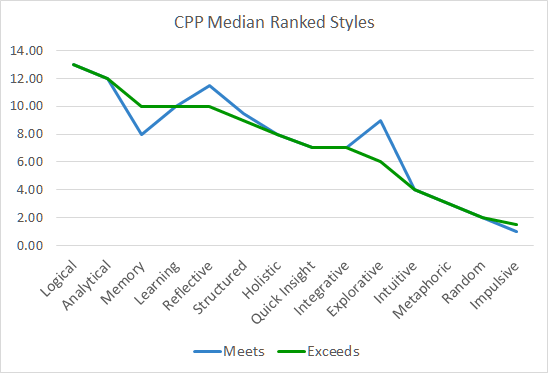 It was found that the “Exceed” performance candidates consistently applied Logical, Analytical, Memory and Learning styles. Very few cases in this group showed a preference for Random (Trial-and-error) and Impulsive (Reactive) styles. For the “Meets Performance Expectations” group, the Pearson correlation between the median CPP Rank for the styles (as ordered) and the order position {1-14} is 0.91. For the “Exceeds Performance group” (Exceeds + Outstanding; n=80), the correlation is 0.98.

This is very clear evidence of the substantive ‘sense’ of these cognitive styles. If style-preferences were random we’d be looking at two straight lines with a constant median value of 7.

Whereas cognitive styles as measured by the CPP indicate broad cognitive preferences and capabilities, the CPP information processing competencies (IPCs) are more specific and reflect functional categories of processing tendencies at various levels of complexity. 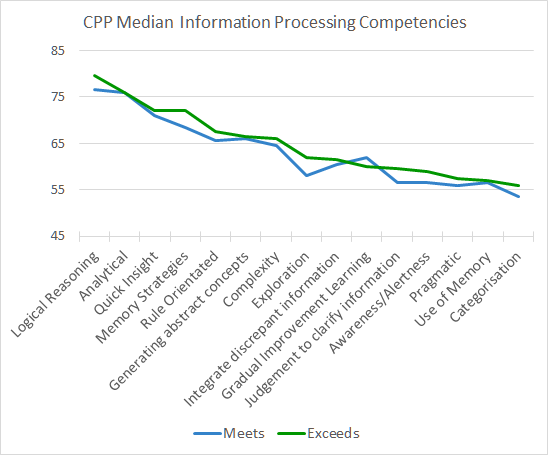 Very similar results were achieved in terms of the cognitive processing scores as with the styles in that the following processes were most commonly and effectively capitalised on:

The above-mentioned processing constructs (in that order) best correlated with the Performance (r = 0.96) ratings of those who met or exceeded the criteria involved. These results indicate the highly rigorous and logical approach of this educated group of executives, as well as their reliance on knowledge and experience (as is often associated with the tendency to capitalise on memory).

From these results it seems that the executives mostly deal with interactive and dynamic systems, requiring a Logical and an Integrative approach, as is typical at the SST Parallel Processing level. Typical Pure Strategic work, however, normally requires dealing with chaos and emerging patterns as it is involved in identifying philosophical trends and macro-economic considerations across industries. A highly Intuitive approach is therefore mostly relied on in Pure Strategic contexts.

This sample of approximately 200 executives from a global production firm, all of whom meet and exceed the performance requirements of their roles (which largely reflect a Parallel Processing level of complexity), showed the following cognitive tendencies as measured by the CPP: