By Paul Barrett and Maretha Prinsloo on December 13, 2019

Of interest are the differences (if any) shown between younger and older employees, with respect to the magnitudes of Information Processing Competencies (IPCs) and preferred Cognitive Styles, within different employment areas.

In this investigation, we looked at how IPCs and Ranked Cognitive Styles vary over different employment areas and age. A sample of the most recently acquired 60,572 cases of CPP data were used, subdivided into two age groups: between 20-30 and between 40 and 60 years of age, excluding those who were identified as “Trainees”. We computed the median IPC and median ranked style for each of the IPCs and Cognitive Styles within each age-group, across 7 employment areas.

The 14 IPCs as indicated in the CPP report, are expressed as normed T-scores, mostly varying between 20 and 80. The 14 CPP Cognitive Styles are ranked, where 1 indicates the least preferred and 14 the most preferred style.

Figure 1 shows the younger and older-aged group medians across 14 IPCs. 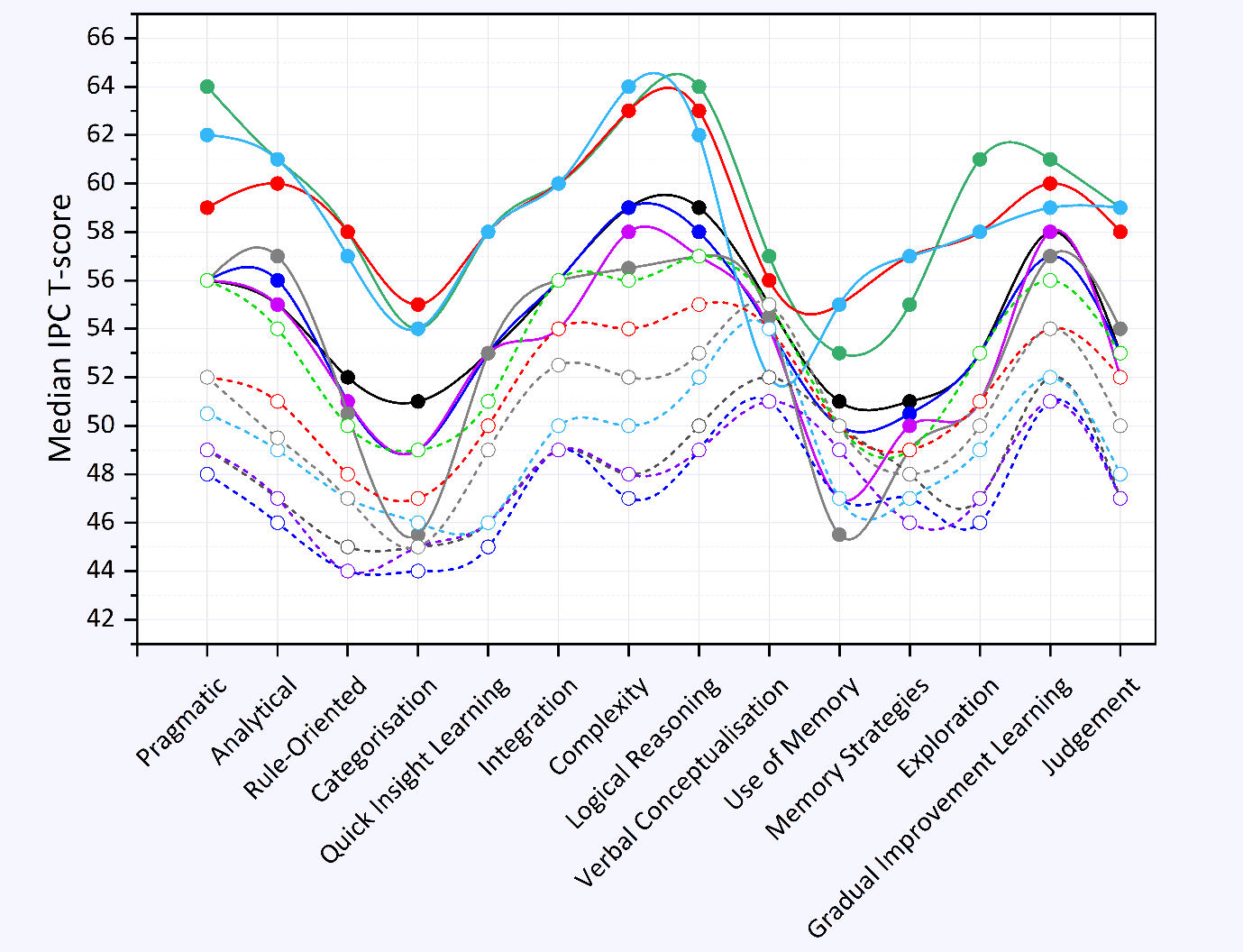 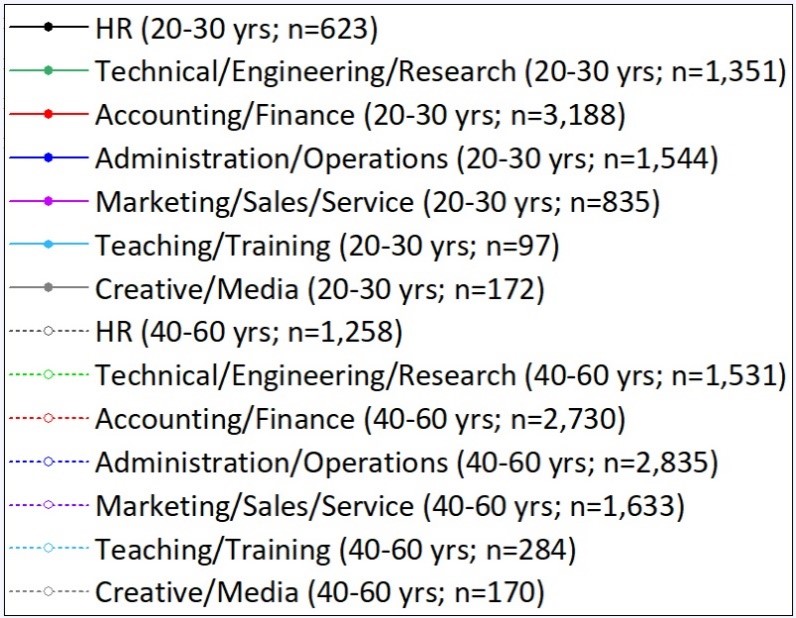 The younger group trends are all solid lines with solid median circles, the older-aged group are the same employment-area colour but, using dashed lines and open median circles.

What we see in Figure 1 is lower IPC medians across all IPCs for older aged employee groups compared to their younger counterparts, with the exception of Categorisation and the Use of Memory.

It is noticeable that the median scores of all the different groups selected here tend to consistently covary across IPCs. This is attributable to the fact that the underlying holonic model of cognition (on which the CPP is designed) assesses processes which are made up of overlapping components which are applied in different sequences / processes. These CPP processes build upon one another and are applied in an integrated way. Certain IPCs primarily reflect capability, or cognitive complexity, whereas other IPC scores largely reflect cognitive preferences related to intellectual habits and emotional needs. For example, the Complexity and Logical reasoning IPC scores, to a large extent reflect current capability whereas the IPCs such as Rule Orientation, Categorisation, Memory, Gradual Improvement Learning and Exploration largely reflect strategies to create cognitive certainty and to be factually correct. For these latter scores, detail and tangible facts are more important that understanding and abstraction. The Quick Insight Learning, Judgement and Integrative IPC scores reflect both capability as well as an emotional need, this time for cognitive challenge and meaning. This clustering of IPC scores is also clearly indicated by factor analyses of the CPP processing scores.

Figure 2 shows the younger and older-aged group medians across all 14 Ranked Styles. 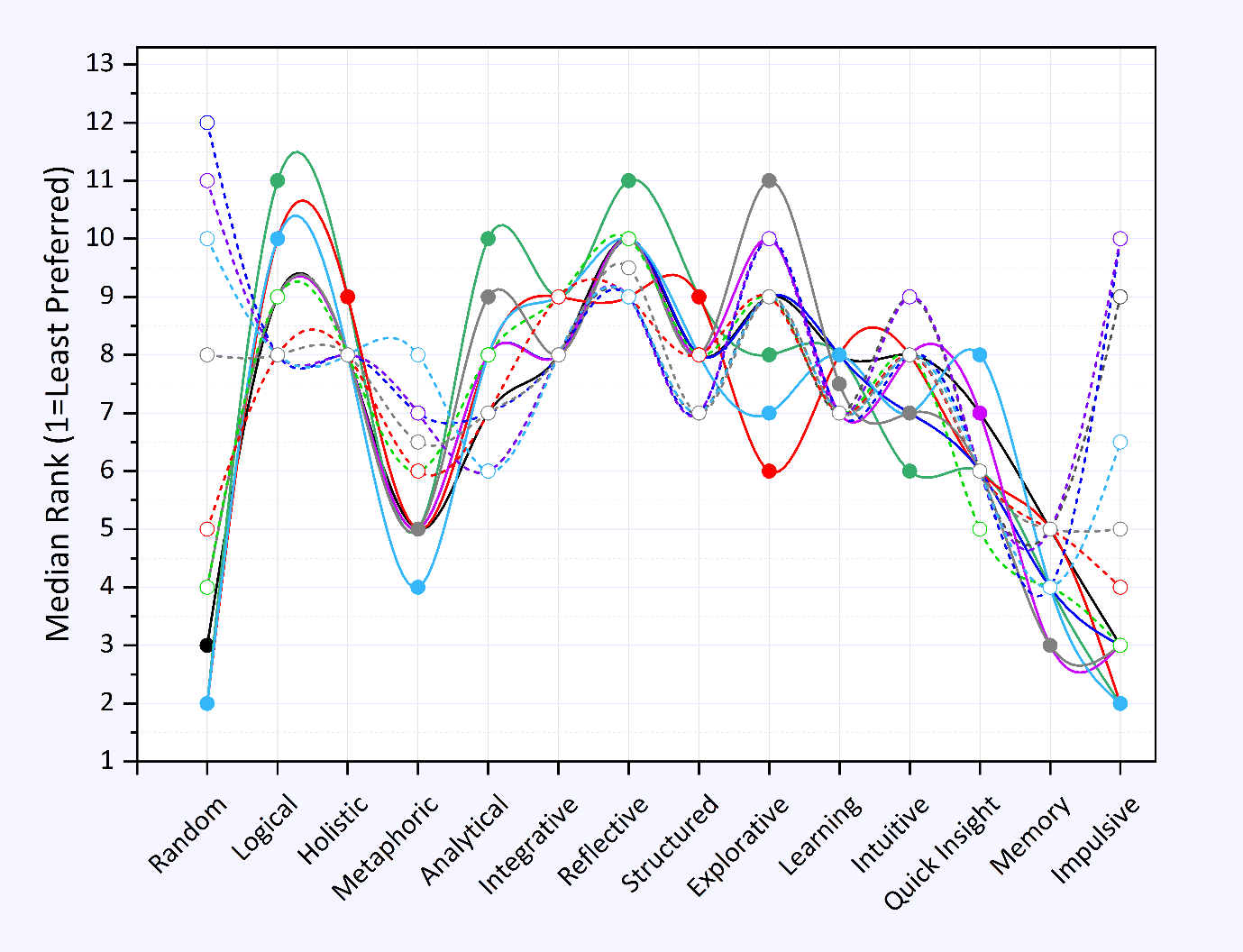 As in Figure 1, the younger group trends are all solid lines with solid median circles, the older-aged group are the same employment-area colour but, using dashed lines and open median circles. The same colours as those in Figure 1 are used for each employment group.

The medians for each age-group, across employment groups are far more similar overall for the median ranked preferred cognitive styles, except for the Trial-and-error (Random) and Reactive (Impulsive) styles, where many older-aged employment groups show a distinct preference for each in comparison to their younger counterparts. The exception here are the Technical/Engineering/Research and Accounting/Finance groups.

The three older-aged groups showing almost identical medians are: HR, Administration/Operations, and Marketing/Sales/Service. These are also the groups whose median preference for Trial-and-error (Random) and Reactive (Impulsive) styles seem to increase substantially with age.

Only the most obvious findings are summarised here. Readers should bear in mind that only group averages are reflected here and that within each group, individuals widely vary in terms of their scores.

It should be pointed out once again that a great diversity of cognitive approaches can be identified within each of these age and career groups. The measurement and contextualisation of individual differences thus remain crucial to optimise person-job matching, employee engagement and the strategic viability of the organisation.