By Christoff Prinsloo and Maretha Prinsloo on December 23, 2019

This study involved a number of investigations regarding the stylistic and information processing preferences and capabilities of candidates from various career groups who showed high levels of performance on the CPP. Normalized-Standardized T-scores (NST-scores) were used here, with ranked scores used for the analysis of the styles, and the scores themselves used for information processing preferences.

Again, somewhat homogenous groups were selected in terms of age, educational level and educational field. From these samples, only the top 10% in terms of CPP performance were selected. The goal was to determine whether qualitative versus quantitative aspects of information processing prevail across career groups. Significant differences between top cognitive performers across groups may indicate that educational and work experience largely shape a person’s cognitive approach to problem solving. A lack of differentiation between groups may indicate that top cognitive performers on the CPP, across the career spectrum, capitalize on similar cognitive competencies. The group information is provided in Table 1. 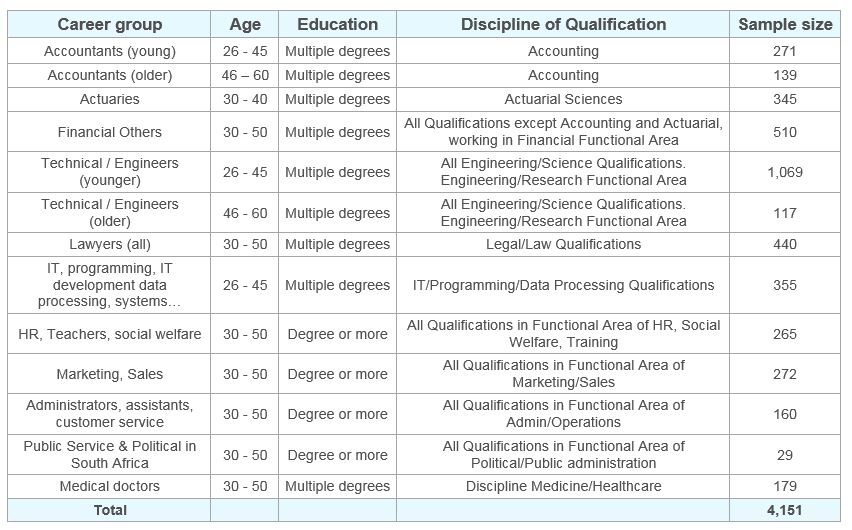 Two examples of the many tree structure representations generated, depicting the stylistic preferences of Lawyers and Accountants (older), appear below in Figure 1 and Figure 2.

Figure 1: Tree structure representation of the cognitive style preferences of the top 10% of Lawyers

Figure 2: Tree structure representation of the cognitive style preferences of the top 10% of Accountants (older)

The results of the tree structure analyses of the Cognitive Style and Complexity preferences of the top 10% CPP performers from the various career groups can be interpreted in the following way:

Further interesting findings regarding the use of the Integrative style include:

Not only the cognitive styles of various career groups were analyzed but also the ranked NST-scores of the Information Processing Competencies (IPCs) of the top 10% CPP performers across all the career groups. Figures 3 and 4 indicate the results of Administrators and younger Accountants in this regard.

Figure 3: The information processing competencies most capitalized on by the top 10% of Administrators

Figure 4: The information processing competencies most capitalized on by the top 10% of Accountants (younger)

In terms of the ranked Information Processing Competencies (IPC’s) which characterized the top 10% of CPP performers across the various career groups, the following findings emerged:

Again (in using ranked NST-scores) it can be concluded that the top 10% of CPP performers across career groups show striking similarities in terms of the cognitive processes capitalized upon.

The results of this study again verify the finding that effective thinkers utilize the full spectrum of thinking processes in a metacognitively directed and flexible manner and that the impact of cognitive competence (the quantitative aspect) to some extent overshadows the impact of specific career-related processing practices (the qualitative aspect) in determining cognitive preferences and habits.

In this additional tree structure study, groups were selected based on the following criteria: varying age, SST level, and Educational level aimed at effectively supporting cognitive functioning per career category. Normalized-Standardized T-scores (NST-scores) were again used here, with ranked scores used for the analysis of the styles, and the scores themselves used for information processing preferences.  The following findings emerged: 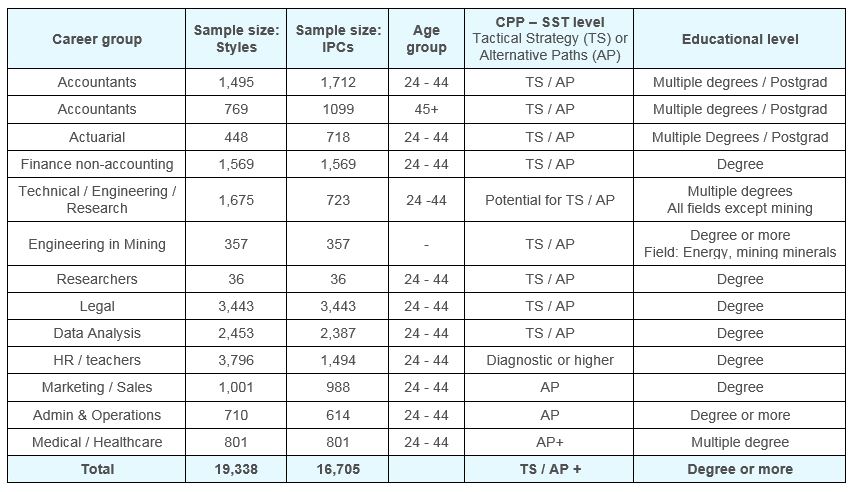 Summarizing the results of this analysis:

Although the results of the data from the various groups described in Tables 1 and 2 closely resemble one another, it seems that the selection of the samples is critical in identifying career specific processing tendencies.