This research study investigates the nature of the proposed holonic model of information processing constructs on which the Cognitive Process Profile (CPP) is based and its implications for strategic work. This is done by determining the relationship between high versus low levels of information processing competence (as a measure of cognitive complexity), and cognitive styles (as a measure of cognitive preferences associated with the inherent altitude and inclusivity of the proposed holonic model).

The CPP measures a person’s cognitive preferences and capabilities by means of a simulation exercise which was designed to externalise and track thinking processes according to thousands of measurement points. The results are analysed by an expert system and automated reports are generated. The CPP primarily measures the following constructs: information processing competencies, cognitive styles, units of information, learning potential, a suitable working environment, as well as cognitive strengths and development areas.

The theoretical model of thinking processes

The CPP is based on a self-contained theoretical model of thinking processes. The Cognadev Information Processing model (IPM) is holonically organised in that the various thinking processes are represented as a “soft hierarchy” of increasingly complex and inclusive operations. A holon refers to a system which consists of various subsystems, each of which incorporates and transcends underlying subsystems. The thinking processes incorporated in the CPP model can be regarded as functional information processing categories.

Not all the information processing constructs measured, indicate effectiveness in thinking, though. Some processes such as Quick closure and Assumptions amongst others, may actually indicate ineffective thinking strategies or an absence of metacognitive awareness.

The theoretical model of thinking processes on which the CPP is based, can be depicted graphically as follows: 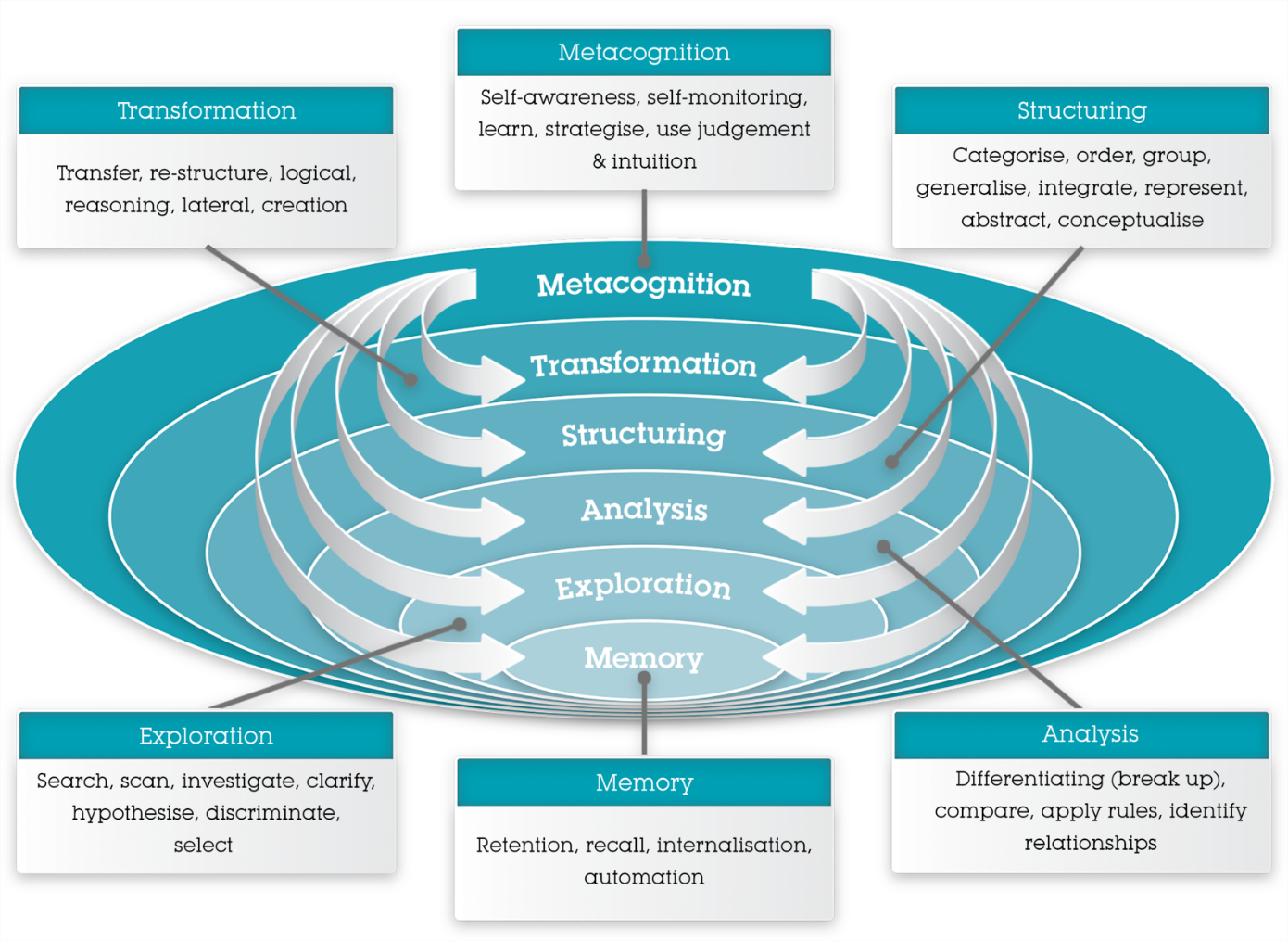 The various metacognitive criteria responsible for the effective application of each of the processes are shown below: 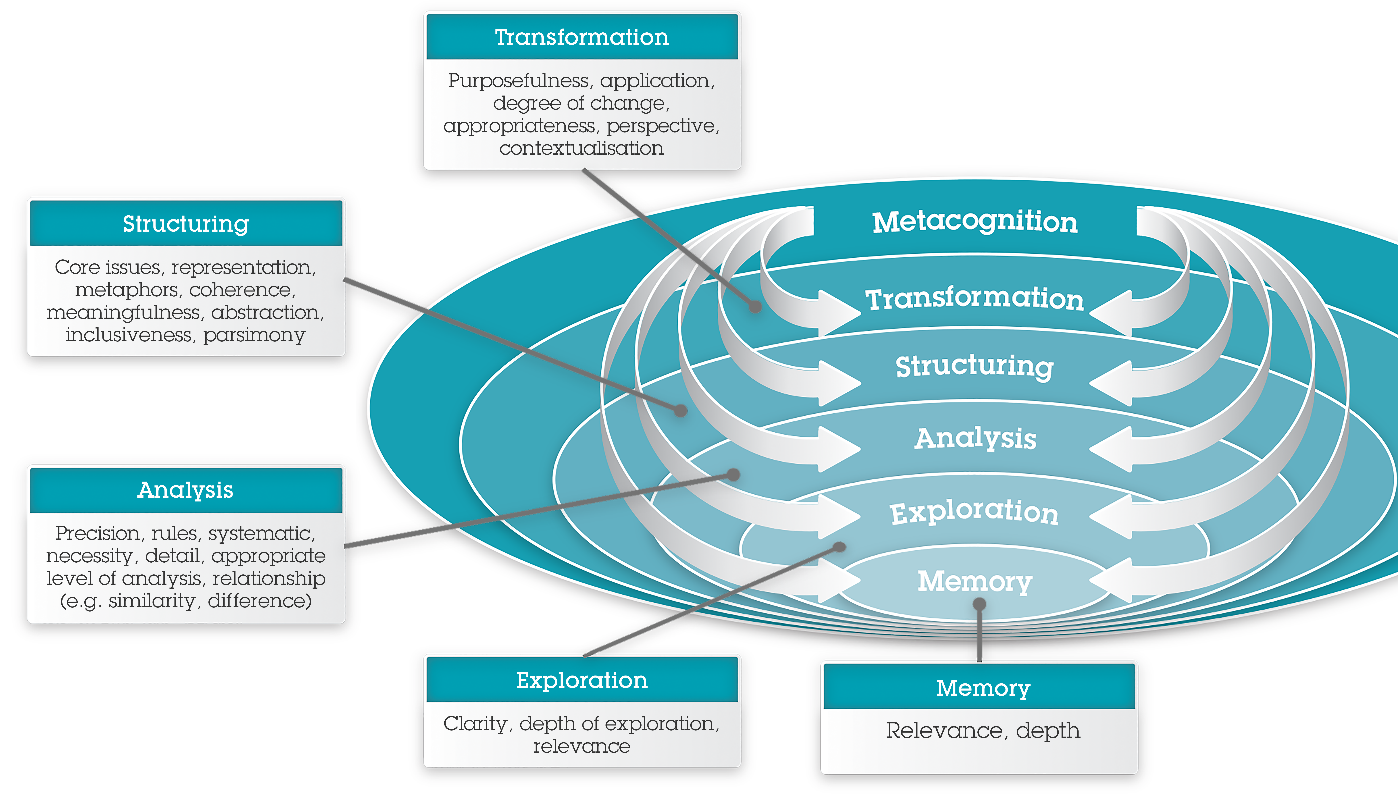 The cognitive styles as measured by the CPP primarily describe the cognitive preferences a person shows in dealing with unfamiliar information. However, it is highly likely that the person will generally apply those same stylistic preferences in familiar contexts also. Cognitive styles can be described as broad cognitive response tendencies and should be understood as the most frequent behaviour during the assessment.

The definition of the particular styles may not be exactly what is generally in layman’s terms associated with the title word. Logical style, for example, implies disciplined thinking in a consequential and process-based manner to transform information structures or to identify implications and consequences. This goes beyond the meaning of the layman’s term “logical”.

A person’s stylistic preferences can be magnified by certain personality and environmental factors as well as value orientations. An example is the Reflective style, which may indicate a level of caution, a risk avoidant personality trait, internalised cultural values or possible exposure to high risk or punitive environments where mistakes are not tolerated. Certain stylistic tendencies are also reinforced or adopted in certain educational and work environments. Examples include the highly analytical requirements of certain financial and scientific career fields, or the creative, intuitive, at times even random, ideas-oriented approaches required by arts and, to some extent, the social sciences. Preferences for the application of particular styles, can thus be rooted in cognitive “values” or habitually applied metacognitive criteria. Included are the tendencies to strive for accuracy; the habit to suppress reactive responses in favour of being reflective; or the tendency to create certainty by approaching tasks in an ordered and structured manner.

Other than the information processing constructs, such as Exploration, which indicates effectiveness of processing, cognitive styles such as the Explorative Style, may merely indicate the tendency to explore irrespective of the effectiveness involved. Typical cognitive styles which fall into this category include the Explorative, Structured, Reflective, Random or Trail-and-Error and Memory styles. The Intuitive and Analytical styles can partly be grouped into this category as well.

However, the Logical, Integrative, Holistic and Learning styles, presuppose effectiveness of approach. These styles also involve dealing with complexity in an “inclusive” and metacognitively aware manner. Again, the Analytical and Intuitive styles can to some extent be added into this category.

To some extent the various stylistic preferences echo the holonic nature of the proposed information processing model.

The CPP indicates a test candidate’s preference for 14 different cognitive styles by assigning a ranking to them according to the least (1) and most (14) preferred or utilised.

Investigating the nature of the holonic structure of thinking processes

The holonic nature of the proposed processing model reflects a progression towards greater complexity, inclusiveness and metacognitive awareness at higher levels of processing. In terms of the altitude inherent to the holonic model, Integrative and Transformational styles (as reflective of integrative and logical reasoning processes) can thus be expected at higher levels of organisation on the holonic model than those of the Explorative and Analytical styles. The more complex styles can therefore be expected to be associated with greater information processing competence.

Evidence for the altitude and inclusivity of the holonic processing model can be investigated by differentiating between individuals with high versus low processing competence and comparing this to stylistic preferences to determine the degree of inclusiveness or altitude of both the proposed processes of the information processing model, as well as the associated styles.

For the purposes of the current analysis, a sample of the most recently acquired 60,572 cases of CPP data were used, selecting two clearly discrete groups from within this dataset according to a simple filter:

The median ranked styles across all 14 styles of the two groups were then compared, where the lowest (1) ranked style is the least preferred, and the highest (14) is the most preferred/utilised.

High IPC cases show a greater preference for the cognitive styles Learning, Logical, Integrative and Holistic. Less conclusive results were found in the cases of the Analytical, Reflective, Memory, Intuitive and Structured styles.

What can we conclude?

Styles that largely reflect the use of less inclusive processing skills, were associated with lower levels of processing competence. For example, by comparing the Explorative and Analytical style preferences, it seems that the Analytical style is associated with greater complexity and altitude than Explorative style and therefore of a more inclusive nature within the proposed holonic structure of the model.

The Analytical and the Logical styles are closely related as both reflect a detailed, rule-based and rigorous approach to problem solving. In the case of the Analytical style, the emphasis is on subdividing information in a detailed and systematic manner to better understand the interrelationships between elements. In the case of the Logical style the emphasis is on following a rule-based approach through to identify consequences and implications or to restructure, transfer, transform or contextualise a solution. From the results obtained in this study it seems that a preference for a logical style is associated with greater complexity and altitude than that associated with an Analytical style.

In the case of the Structuring, Integrative, Holistic and Metaphoric styles, all are involved in meaningfully conceptualising information. The Integrative and Holistic styles are closely related as some of their building blocks overlap. The two approaches do, however, differ in that the Integrative style is largely associated with an interest in coherence and abstraction, whereas the Holistic style is aimed at considering the big picture while not neglecting detailed elements that may impact on the practical implementation of conceptual solutions in specific contexts. It was found that the Integrative and Holistic styles reflect a greater degree of inclusiveness and altitude than the Structuring and Metaphoric styles.

These findings support the altitude and inclusiveness of processing constructs of the proposed holonic model of processing and indicates the cognitive styles best suited to complex work environments. The implication of this finding is that the Logical, Integrative, Holonic and Learning styles are the best suited to the cognitive requirements of strategic roles in organisations

* Cognadev Technical Report #10 provides the detailed sample information and descriptive statistics from which this blog article has been compiled.