An Organizational Culture Solution: Theory on Values and Culture

In 2014 the Merriam Webster’s dictionary identified “culture” as the most popular word of the year. Many contemporary HR publications too, focus on values and culture as keys to employee engagement, productivity and leadership. The recognition of value orientations is, however, by no means new in Social Sciences, in fact, publications as early as the 1800s can be found in this regard.

Many different models in psychology, consciousness theory and even the spiritual traditions describe levels of awareness and consciousness, constructs which are closely linked to value orientations. Examples include the work of Gebser on cultural memes, Loevinger on ego states, Kohlberg on moral development, Piaget and Perry on intellectual development, as well as May on consciousness development, to mention but a few. The Spiral Dynamics (SD) model as developed by Clare Graves, however, overlaps with all the above and is briefly summarised here to provide a broad framework for understanding the worldviews and valuing systems of people.

Dr Clare Graves’s comprehensive model of “biopsychosocial systems development”, can be represented as a spiral of various hierarchically organized levels of human existence. According to Graves “The psychology of the mature human being is an unfolding, emergent, oscillating, spiraling process marked by progressive subordination of older, lower-order behavior systems to newer, higher-order systems as man’s existential problems change.” 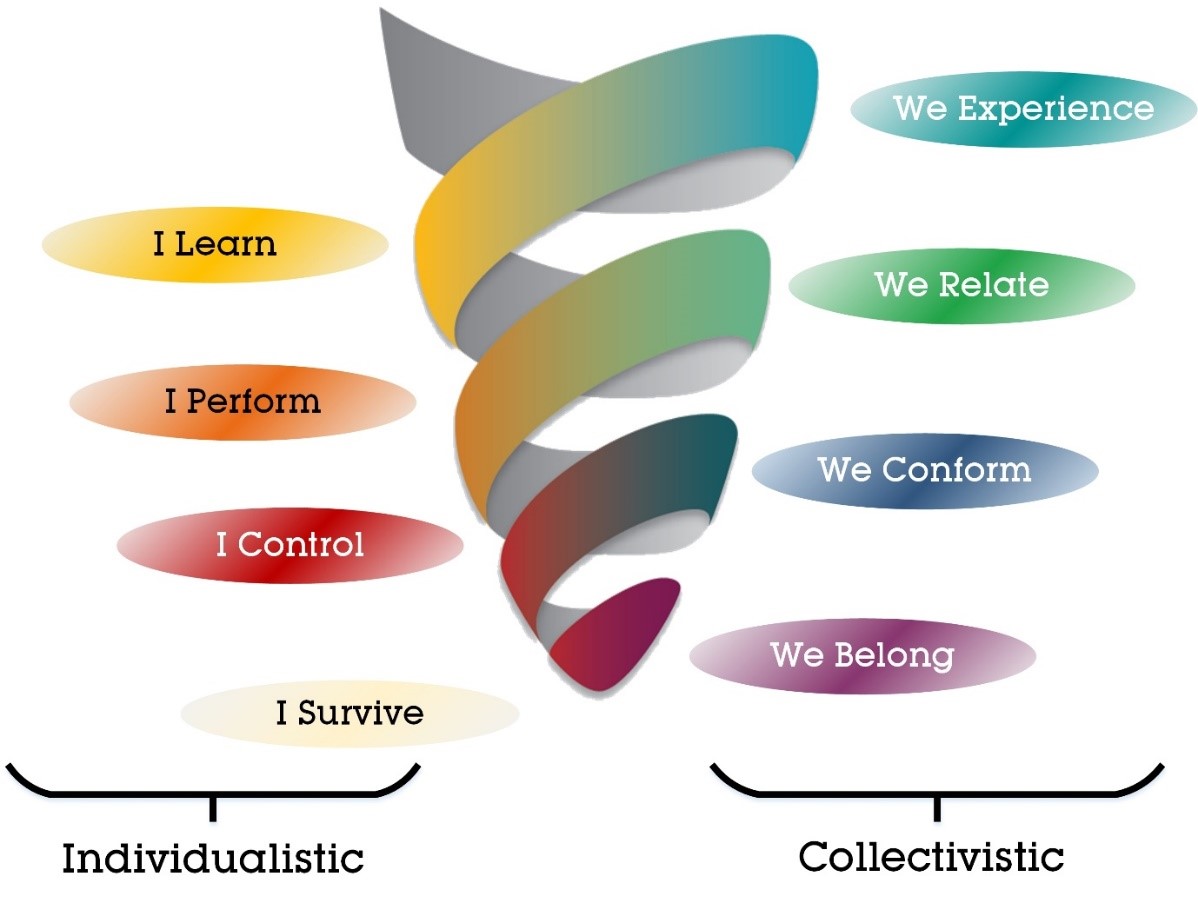 Development up the spiral thus fluctuates between a focus on “I”, or the expressive systems on the left of the spiral, and “we” or the collective systems on the right of the spiral. Over time, new levels of consciousness may well emerge for both individuals and groups, as contextual requirements may render inappropriate valuing systems ineffectual.

Valuing systems act as catalysts in determining how people can be expected to apply their intellect, talents and personality. By identifying the value orientations of individuals one is likely to predict those in the workplace that are best suited to challenges such as: doing routine work in a team context; relentlessly pursuing goals under difficult circumstances; maintaining the status quo by ensuring quality and controlling risk in a reliable and structured manner; showing a customer orientation; flexibly generating new strategies, and persuasively creating value for all stakeholders; building relationships, developing others and creating harmony at work; as well as integrating and understanding the dynamics of the whole system to identity the leverage necessary to initiate change. The SD model thus offers practical utility within the context of talent management.

Below is a rather cryptic description of each of the valuing systems that forms part of the SD model of consciousness development (as it appears in the Value Orientations (VO) reports of assessment candidates): 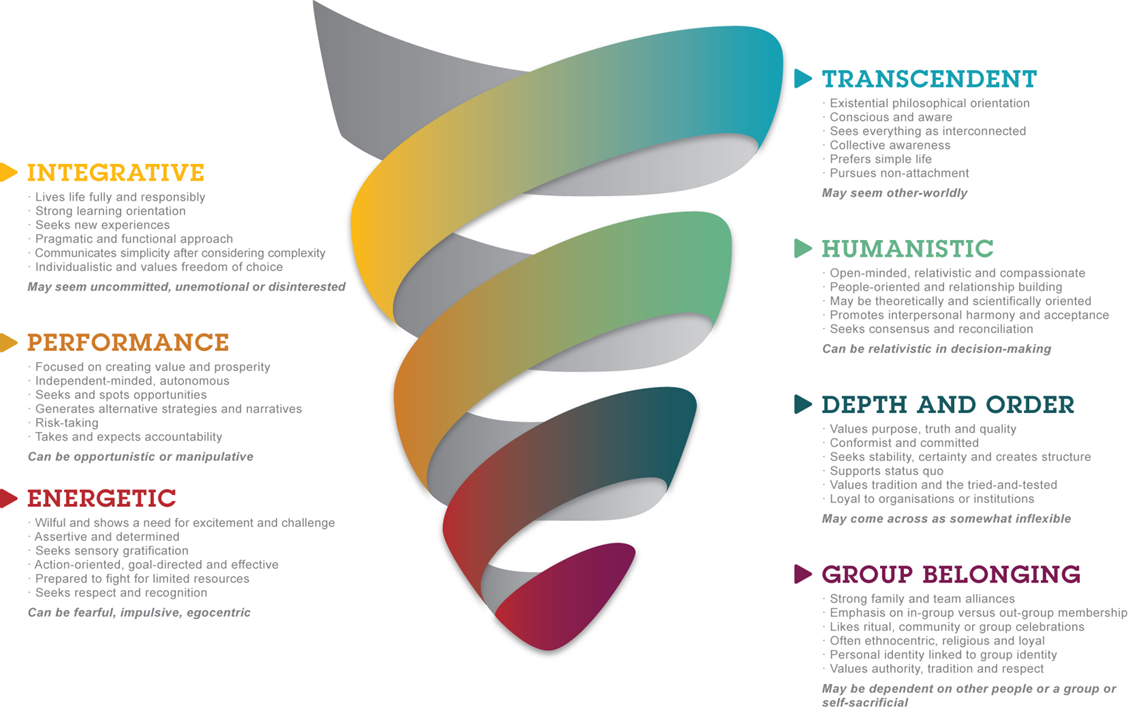 As mentioned, development of increasingly encompassing valuing systems on the spiral, takes place by fluctuating between individualistic, self-expression value systems and collectively attuned value systems. Graves predicted that further value systems may emerge such as the Coral valuing system which may reflect the theme of intention, alignment and spiritual empowerment. 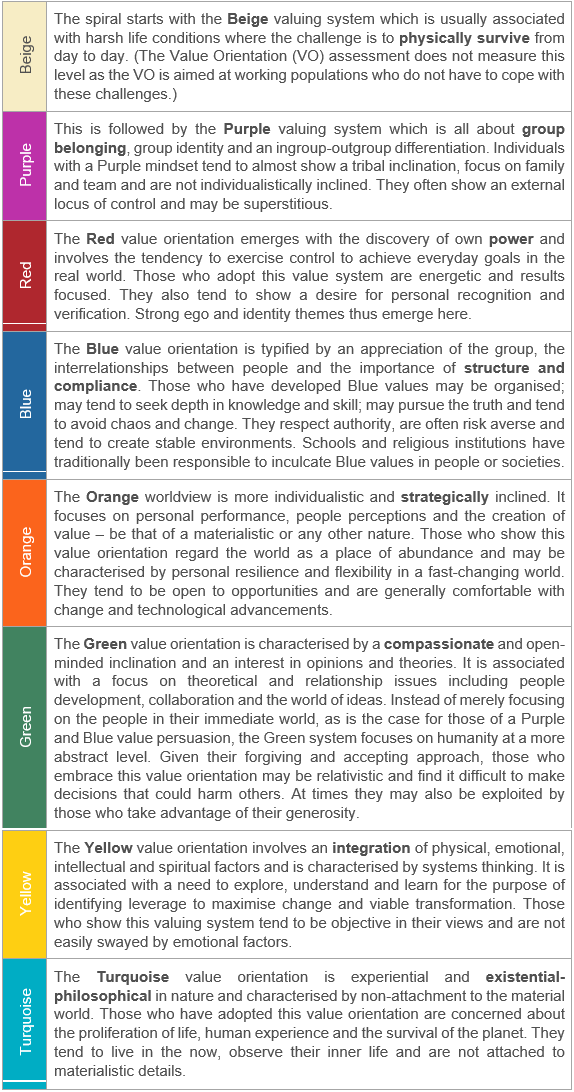 The next article describes how the SD model can be used to manage the organizational culture and values.